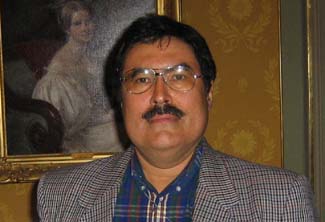 The event was moderated by Ambassador Ronald Barnes, Chairman of IPNC. In his opening remarks he referred to the discrimination and institutional delay in the administration of justice. He further elaborated that the right to self-determination is expressed in the UN Charter, International Human Rights Covenants and broadly referenced in the Universal Declaration of Human Rights and in the several United Nations and Regional Declarations and Outcome Documents of the World Conferences. Mr Barnes remarked that the riddle in human rights is how to implement the right given the vastly politicized milieu at the United Nations and the discrimination in the denial of right to self-determination that includes apartheid and that discrimination is a crime against humanity.

Professor Nazir A Shawl – Chairman SACFPHR & Constituent Member of Organisation of Kashmir Coalition and Human Rights Activist for Kashmir stated that the purpose of the United Nations is to complete the process of decolonisation and ensure that the birth right of self-determination is granted to all the occupied nations as it is the best conflict preventing strategy. He contextualized the Kashmiri struggle for self-determination and referred to the machinations of the Indian administration against the Kashmiri struggle of self-determination. Prof Shawl highlighted the Indian designs to change the demography in Kashmir both physically and constitutionally by abrogating Articles 35A and 370 of the Indian constitution which accord special status to Jammu & Kashmir and that this being a serious concern. He concluded with the declaration that there is no peace without justice and no justice without peace.

Madam Daniela Doengues – Head of Scales for Justice referred to systematic human rights violations perpetrated on the people of Palestine. She graphically explained how the changes both demographic and territorial losses were executed unashamedly. She also contextualized the unethical and genocidal behaviour of the Zionists to deprive Palestinians of their territory and their right to live with dignity and honour and that justice remains denied to the people of Palestine.

Zubair Awan – Chairman Kashmir Youth Assembly and Practising Solicitor on Human Rights elaborated that the very objective of instituting the United Nations is to strengthen coexistence among nations and help establishing a polity on the basis of peace and justice. The conflicts that are the painful realities of our era need to be addressed as per the Article 1 of the UN Charter by the democratic method of holding a referendum. The Kashmir conflict must receive the United Nations urgent consideration in implementing its promised referendum in entire Jammu and Kashmir.

Barrister A Majid Tramboo – IHRAAM Permanent Representative to United Nations and Constituent Member of Organisation of Kashmir Coalition (OKC) in his concluding remarks referred to the illogical and factually ludicrous “right to reply” of the Indian diplomat on the floor of HRC. He argued that concoctions and self-deceit cannot change the facts on ground. “The highest military deployment (700000 military and para-military troops) and gross human rights violations in terms of torture, excessive use of force including pellet short guns, enforced disappearances, arbitrary arrests and detentions and sexual violence have been documented no less than in the UN Report by the Office of the High Commissioner for Human Rights”, Barrister Tramboo strongly pointed out. He alerted the international community that there exists explosive human rights crisis in the turmoiled Kashmir and that the Indian propaganda of “terrorism” in Kashmir is simply to hide their crimes there to hoodwink the international opinion.