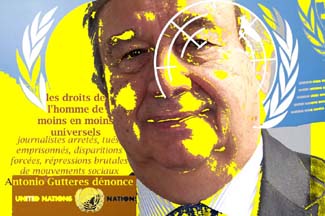 Fighting for their rights, the Indigenous Peoples and Nations Coalition (IPNC) are submitting a Letter calling for State support of a draft resolution to the Human Rights’ Council in Geneva followed by action at the General Assembly level

In the long-running struggle for their rights, the members of the Indigenous Peoples and Nations Coalition (IPNC) are submitting a draft resolution to the Human Rights Council in Geneva. The Coalition is based in the United States and comprises grassroots supporter organizations dealing with Indigenous peoples’ affairs.

The resolution reaffirms the Coalition’s adherence to the principles enshrined in the Universal Declaration of Human Rights and those in the Charter of the United Nations, in particular equal rights for all persons and the right of all peoples to self-determination.

The resolution is a follow up on the Human Rights Council resolution 48/7 requesting the Human Rights Council and the General Assembly to adopt appropriate implementation measures for the admissibility of petitioners pursuant to recommendations by Special Procedures, Treaty Bodies, Mechanisms and by the Universal Periodic Review. Alaska and Hawaii are recognized as a Non-Self-Governing Territory in General Assembly resolution 66 (I) on 14 December 1946 and removed with glaring irregularities, in particular, with violations of apartheid.

In their letter and also in the resolution they highlight in particular Article 2 in the Human Right’s Declaration stating that “Everyone is entitled to all the rights and freedoms set forth in this Declaration, without distinction of any kind, such as race, color, sex, language, religion, political or other opinion, national or social origin, property, birth or other status. Furthermore, no distinction shall be made on the basis of the political, jurisdictional or international status of the country or territory to which a person belongs, whether it be independent, trust, non-self-governing or under any other limitation of sovereignty”, and Article 17.1: » Everyone has the right to own property alone as well as in association with others and 17.2 No one shall be arbitrarily deprived of his property. »

However, the situation at the grass-root level is far from being one of respect for these important principles, for they are systematically honored more in the breach than in the observance, and not only in Alaska but elsewhere on the North American Continent.

The letter accompanying the draft resolution, which is to be presented to officials in the Human Rights Council in a couple of days, drew attention to the difficulties these groups have been facing over the years, and continue to face to a huge extent.

The demands of the Coalition have been summarized in 14 different points concerning a wide variety of issues such as racial discrimination; the legacies of sterilization of indigenous women; the lack of education, the right to development and opportunities of all sorts; and perhaps the most significant one: the right to self-determination and to compensation for the damage done by the colonial powers.

In their letter they also ask for support to fight racial discrimination and other prejudicial behavior on the part of the occupying powers, to put an end to human rights violations of all kinds and to protect human rights defenders.

Another salient theme is the right of self-determination, a notion that the United States President Woodrow Wilson put forward more than 100 years ago in his Fourteen Points, which served as a basis to negotiate the settlement that followed the first World War.

Alaska is still under occupation by a foreign power according to Ambassador Ronald Barnes. The indigenous peoples of Alaska, Hawaii and the Western Hemisphere have suffered and are still suffering today, something that can be said about indigenous peoples not only on the North American continent but elsewhere. Most of the indigenous face high unemployment levels and exploitation in various forms and have no right to own property. As a result, they have had many social problems over the years. For Ambassador Barnes it is an issue of racial discrimination due to the colonial powers, the white man’s wrongdoings, as expressly stated in the United States Supreme Court of its superiority privileges in judicial precedence, in Alaska and elsewhere.