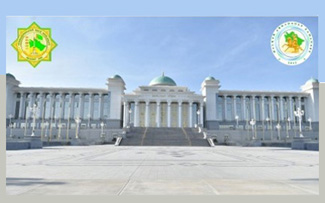 The results of the Presidential elections in Turkmenistan

On 12 March 2022, an important socio-political event – the election of the President of Turkmenistan – was held in an organized, festive and cheerful manner. From 7:00 to 19:00 on election day, eligible citizens took part in the voting. Of the 3.460.080 registered voters across the country, 3.362.052 cast their ballots, with a turnout of 97.17%. A total of 9 candidates competed in the elections which was held in democratic conditions.

Thus, according to the results of the voting:

Serdar Gurbangulyyevich Berdimuhamedov, Deputy Chairman of the Cabinet of Ministers of Turkmenistan 72,97% ;

Berdimammet Hanmammedovich Gurbanov, chief physician of « Avaza » sanatorium of the ministry of Health and medical industry of Turkmenistan 2,22% ;

Kakageldi Atajanovich Saryev, director of the research and production center « Renewable energy sources » of the State energy institute of Turkmenistan 1,09% got votes.

Based on the decision of the Central Election Commission at its final meeting on March 14, 2022 and in accordance with article 76 of the Electoral Code of Turkmenistan, Serdar Gurbangulyyevich Berdimuhamedov, Deputy Chairman of the Cabinet of Ministers of Turkmenistan the candidate who received 72.97% of the votes in the elections, has been elected President of Turkmenistan.