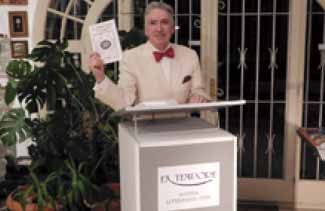 There we were, on 14 August 1989 — a young, dynamic Brazilian UN staffer, Leonor Sampaio, a well-seasoned UN translator from Argentina, Sergio Chaves, and myself, an eager-beaver American lawyer with the then Centre for Human Rights (soon to be renamed Office of the High Commissioner for Human Rights), sharing impressions on Isabel Allende, Margaret Atwood, Jorge Luis Borges, Paulo Coelho, Friedrich Durrenmatt, Gabriel García Márquez, Nadine Gordimer, Philippe Jaccottet, Doris Lessing — while leisurely sipping on espressos and cappuccinos….

Half-way through our animated chat, Leonor proposed launching a literary club at the UN, Sergio seconded the initiative, and I suggested publishing our own literary journal. We were excited about this incipient United Nations Society of Writers, Société des écrivains des Nations Unies, which would tap the hidden literary talent of so many UN staffers – not just at UNOG, but at ILO, WHO, WIPO, even WTO! Who knows? Maybe some kept love poems and stimulating essays somewhere hidden in their office drawers, just waiting to let them out. Would our colleagues not welcome the opportunity of liberating themselves from the constraints of UN jargon, of resolutions with long preambular paragraphs and reports full of graphics and heavy with annexes? We were persuaded that many of us could produce respectable poetry, short stories, essays, science-fiction, even plays in all six UN languages– not in bureaucratic legalese, but in the style of our favourite contemporary authors.

Happy with the prospect of cultivating our own garden and plucking the flowers of multicultural imagination, we knew we needed a catchy name – not a boring or hackneyed “UN literary review” or a pretentious Pléiade … We wanted to  attract bold, spontaneous, uncomplicated, crisp new texts that would address our innermost feelings, aspirations, fantasies – whether humorous, melancholic, nostalgic or lovesick. A name for the review soon popped up in my mind: Ex Tempore – impromptu, improvised… We were ready to venture into the production of literature and were optimistic about the response by peers and outside critics.

Both Sergio and I were already members of PEN International, Centre Suisse romand and had many non-UN friends who wrote extremely well. We also knew that the then Director General of the United Nations Office in Geneva, Jan Martenson, was member of Swedish PEN and author of some 30 novels – most of them police thrillers. We felt confirmed in our project.

The first problem was, of course, how to finance it? We knew that initially we would have to do it out of our own pockets and were confident that with time we would find sponsors and subsidies. This aspect of the adventure proved particularly arduous, and it was not until 1993 that we managed to obtain a modest subsidy through the Socio-Cultural Commission of the Coordinating Council of the UN staff. Volume one was typed on A4 paper using regular typewriters (not computers) and assembled quite simply, photocopied and then bound in a Migros-folder, just like the ones that students use to submit their term papers.

Volume one came out in October and comprised a mere 23 pages. The A4 format (somewhat smaller than the folio format of Guttenberg’s Bible) was kept for four more issues, until we chose the A5 format for volume 6 (reminiscent of the popular Renaissance quarto format, although it actually resembles more the octavo format) and all subsequent volumes. The number of pages quickly rose from 23 to 60 to 100 to the now more common 160 pages, and 180 for the 2019 thirtieth anniversary issue.

In the course of the 1990’s we started using computers for formatting and scanning of pictures. The then Editor-in-Chief of UN Special, Claude Citon (1938-2020), helped us with useful advice on how to produce the magazine, and Pierre Jourdan, also of UN Special, helped us with the formatting. Since volume 2 every cover has been designed by Diego Oyarzun Reyes, who also provided original drawings for the body of Ex Tempore and the logo with the distinctive pen.

Among the authors of the first hour I want to thank Claude Citon, who contributed an essay “Satori” for volume one and has written for Ex Tempore ever since and Aline Dedeyan, whose short story “the day of the tenth year” graced the pages of volume one and whose clever plays have appeared in many subsequent volumes of Ex Tempore. Over the years many UNSW members contributed drawings and photos, notably Martin Andrysek, whose artwork was much appreciated by the readership.

Soon we felt the need to give our authors the opportunity to express themselves in public, and started convening ad hoc poetry readings, sometimes in the UN theatre room XIV but also in rooms VIII and IX of the Palais des Nations. Since January 1997 we have held a literary salon at the “Villa des Crêts”, attended annually by 40 to 70 literature lovers. On occasion we have held summer or autumn events in the garden, e.g. to celebrate the 20th and 25th anniversaries of Ex Tempore or to commemorate the passing away of Mahmoud Darwish, a dear poet. We have also assembled in the Press Bar – for old times sake.

The press initially showed considerable interest in our work, as manifested in numerous articles in the Tribune de Genève, Journal de Genève, Le Courrier, and Diva International. More recently the media has been less receptive to our continued existence – I guess we ceased being “exotic” or a “novelty” long ago. Indeed, for over thirty years UN staffers have been proving their literary talent and displaying kaleidoscopic interests from humour to satire to tragedy to science fiction.

Our literary venture was accompanied by the conviction that UN staffers had a vocation to promote peace through understanding, to build bridges between peoples and cultures. We felt inspired by the Purposes and Principles of the UN Charter, notably the promotion of human rights for all, and the commitment to save succeeding generations from the scourge of war. We shared and continue to share the spirit of the UNESCO Constitution and of civil society initiatives, including the 1921 Charter of PEN and its emphasis on the responsibility of authors to put literature in the service of peace and to defend the Voltairean principle of freedom of expression and tolerance toward dissenting views.

UNSW continues to advocate international solidarity in and through our cultural diversity, and would like to be seen as a herald of democracy. Over the centuries many authors and musicians have shared this vision of universal peace, e.g. Immanuel Kant in his famous essay on Perpetual Peace, Hugo von Hofmannsthal and Richard Strauss, who founded the Salzburger Festspiele in 1920 (one hundred years ago!!!) to consecrate music and drama to the task of unifying nations and cultures, expressing the ineffable in music – that highest aesthetic form and vital principle of humanity’s striving for transcendence.