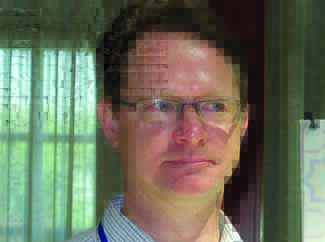 Music is an important tool to create peace

It’s in Samarkand, at the Sharq Taronalari International Music Festival, that we meet this dynamic music professor from the United States, living and working in Bergen, the Norwegian music capital, and birthplace of the famous Norwegian composer Edward Grieg. David Hebert, despite his young age, has a long and impressive curriculum vitae. So now we leave the floor to Professor Hebert.

Q: You held a presentation on “How to teach music to foreigners outside their country”. How did you first get the idea to start working on this concept?

I have experience as a professional musician and a musicologist, and have lived in many different countries, but I have also worked in the field of music education. Therefore, I’m very concerned with how we can train school teachers to be able to teach about music from different parts of the world. I find that in most parts of the world actually there is a problem with music being taught in a mono-cultural approach. This means that wherever people live, they tend to teach music from that country, or where they are from, or teach Western European art music; in some cases, popular commercial pop music or perhaps some jazz. In most places, there is not a lot of representation of music from other continents, for instance from the Southern Hemisphere or music from Central Asia. I thought it would be useful for the purposes of this conference to give a presentation on some effective ways that have been developed now for teaching music from “far-away” places like Central Asia, or other continents whose traditions some people do not have so much awareness of nor connections to.

Q: You are a music professor. What exactly do you teach?

My main position is in a music teacher education programme in Bergen, Norway. Most of my students there are doing a master’s degree in music education, planning to become music teachers, and I also teach in a doctoral programme. There I teach a course in non-western educational philosophy and a course in cultural policy. I teach at other universities as well. I am a visiting professor at Lund University, at the Malmo Academy of Music, where I work with doctoral students. We have a research programme on traditional music in Vietnam. Then, I do a lot of work in China, with universities there. For instance, in the law school in Beijing, I teach a course on arts policy. I am working with the China Conservatory in Beijing. We are trying to set up a new doctoral programme on the tropical island Hainan between China and Vietnam, and then, we are developing online collaborations between higher education music programmes. Two hundred Chinese universities and music conservatories have agreed to cooperate online.

This is also related to a project that I have in Europe. We have a Nordic Network of Music Education, which includes the eight Nordic and Baltic countries, all 15 master’s programs across these eight countries. We have exchanges of teachers and students, annual intensive courses in a different country each year, bringing all the students and teachers together. We are developing online resources now, called MOOCs, courses that anybody can enjoy, a sort of video-formatted class for people of all ages and all backgrounds. The idea is to have the resources for teaching about music from all over, for instance about music from Estonia where you learn about all the major performance traditions and instruments, then added to that you can watch specialised videos about instruments or specific approaches.

We are trying to do that in northern Europe, linking to the projects in China, representing each region of China.

Q: How do you find time to do all this?

I do not really, I am usually too busy. I do not watch television and have cut out anything that is not essential in life. Maybe I work a little too much, but it is fulfilling.

I think that music is an important way to create peace through respect, encouraging peaceful cooperation between people everywhere, so, it is important to seek mutual understanding through music, and especially to have cooperation between teacher education and music conservatories. Often, the music conservatories focus very much on training professional musicians, and they are not as much connected to society. In teacher education, when music is brought into education, as I said, it often does not represent music as a global phenomenon. I therefore think there is a need for better cooperation in these fields, and that is what I’m working on. The focus should not be so much on training the next generation of musicians, but the next generation of people who may be in any career, but who would value music. If you want to support music, listening to it and participating in it… Maybe a taxi driver, journalist or attorney—whatever the job—hopefully outside their job, they participate some way in music –in a choir, or playing an instrument. It’s important to enjoy music and be willing to support music by supporting politicians who are willing to use some money to promote musical activities, or buying tickets to concerts, and so on.

Q: Do you think that, as many people say, classical music and opera are music for the elite, and that there is a gap between the elite and the others when it comes to music?

If yes, what can be done to reduce the gap? I have done interviews with opera directors about this very issue. I know one professional opera director in Bergen rather well, Mary Miller, and I have talked about this subject with her, for instance. I also have a chapter in one of my recent books, called Music Glocalization: Heritage and Innovation in a Digital Age. There, we describe different types of opera around the world. The European opera tradition, even within the classical music world, does have an image of being elite music, and Hollywood and things like cartoons worsen that perception for children, where very often opera is parodied as having nothing to do with ordinary people – something for just arrogant and wealthy people. But if you look at the real stories of opera, these are stories that are inspirational and show people being disadvantaged yet achieving greatness. In Bergen, our opera director is taking opera out into the parks to try to break these stigmas and broaden audiences.

The problem is also that commercialized popular music has become something designed and marketed for teenagers. A lot of traditional music is stuck in-between. With the traditional music, many performers are real artists, yet they are often not respected to the same degree as a great classical pianist. At the same time, they are not given the financial benefits of performers in commercial popular music. I think there is a need for better policy, so, I support folk music initiatives in performance traditions that can be very profound. It’s a matter of heritage.

Q: You are living in Bergen, a city that it’s known to be an international music city. Was this the reason why you chose to come to Norway?

I have lived in many different countries, and in many parts of America…I have also lived in New Zealand, Japan, in Moscow… Eventually I ended up in Bergen for a lot of reasons. One is that this is really a beautiful place. I think the fjords are really the most beautiful places on earth. Bergen is a very musical city.

Q: So, you are happy in Norway?

In many ways yes, but I’m also happy when I’m away!

Q: What are you going to do next?

I’m trying to finish a new book, which is a part of a series on world music. The previous books in the series look at how to teach music from other parts of the world, at different levels of education, starting in primary school, on to high school… but my volume is dedicated to higher education. Another book I am developing is about cultural heritage policy. It is very international in scope and based upon the PhD courses I have taught for two years in Bergen, and the other main thing is the online courses. That is really the way to go, using media technology for educational outreach.

Q: Do you think that ordinary people do not care much about their traditional music?

It really depends on the country. In Central Asia and Southeast Asia for instance, people have a more traditional way of life, and traditional music is clearly part of their daily lives. In industrialized societies, instead of seeing music as something you participate in, it’s more a form of passive consumerism. It’s something you stream through your phone, and it’s something taken for granted. So, it is a different view of the importance of music, and completely disconnected from the ritual context that you historically find in traditional music. I think that most countries are changing quickly with new technology, so, everywhere it is something to be careful about.

In order to sustain traditional music, it’s important to have some idea of how you can adapt it in a new way to all of these technological changes.

“In industrialized societies, instead of seeing music as something you participate in, it’s more a form of passive consumerism.”Q: Do you have a special message to our readers?

Yes, I think that the potential role of music toward the objective of peace, international cooperation and community development is often underappreciated. Diplomats would do well to learn more about how music can be used, and support efforts, and cooperate with musicologists, musicians, and others who work closely with music. There’s a lot of research showing a very positive effect on how music creates mutual understanding among people. Music has a more profound effect than most people recognize, and part of it is that you can instantly affect people with emotion, and this is something that—if you look at every mass movement, around the world, at any time, or government, music is a part of every ritual—it’s something that is included because people realise that, if you have music, it makes a huge difference. If you want to get people’s attention, if you want to get them working together, or even want them to move in the same way, music is the way to do that. Music is a very powerful tool, and it’s worth their attention!