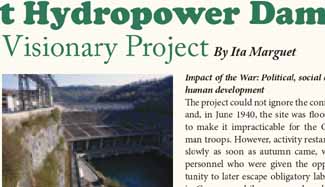 The hydropower plant of Génissiat on the Upper Rhone river in France is a powerful industrial structure of gigantic dimensions capable of producing yearly the electricity required for the consumption of 700,000 households while respecting the environment in which it was built. It is part of the country’s energy history and was hailed as the ‘French Niagara’ at the time of its inauguration on 1 August 1948 by the then President of the French Republic. The gigantic project slowed down during the Second World War, took no less than eleven years to complete, mobilised 3,000 workers and represented a human saga that positioned the Compagnie Nationale du Rhone (CNR) as a developer of rivers and a producer of renewable energies.

The construction demonstrates the ingenuity of those who designed it, and the tenacity and bravery of the thousands of workers who built it. Today the building and the equipment of the dam and hydropower plant remain as evidence of the ambitions of their sponsors. A monument recalls that when it was built Génissiat was the most powerful hydropower plant in Europe. The site is open to conducted tours for the public to visit and admire as an edifice that has played a part in history.

In 1942 its infrastructure provided housing for single workers of 100 beds, a canteen and a caretaker’s lodge along with other provisions for the workers including health, sports and cultural facilities. In 1948 there was construction for engineers. A monument to those who died during the construction of the dam was consecrated in October 1995. It stands at the entrance to the Génissiat cemetery that includes names showing that workers came from Algeria, Poland and Italy.

As concessionary of the river, the CNR developed it between 1935 and 1986 in line with a triple mission to produce hydroelectricity, facilitate navigation, and supply water for irrigation and other agricultural uses. Thus it designed and implemented the global project comprising nineteen dams and nineteen hydropower plants that operate for the benefit of the community from upstream and downstream, by adapting topographic changes: the narrow gorges of Injoux-Génissiat, and the wide plain around Orange. CNR’s development schemes are all “run-of-the-river”, except for Génissiat which is a medium head dam-hydropower plant. It also developed a wide gauge navigable waterway between Lyon and the Mediterranean and installed water inlets for irrigating farms. Amongst its characteristics, it is a gravity dam with height of 140 metres and width at its base of 100 metres. A Glossary of the overall technical terminology is contained in a booklet.*

Impact of the War: Political, social and human development

The project could not ignore the conflict and, in June 1940, the site was flooded to make it impracticable for the German troops. However, activity restarted slowly as soon as autumn came, with personnel who were given the opportunity to later escape obligatory labour in Germany, while many workers later joined the Resistance.

Following the Second World War, when CNR sought to quickly satisfy the energy needs of a country in the process of reconstruction, up to 3,000 people worked on the site. A large number of Italians, Spanish, North Africans, Vietnamese and prisoners of war toiled alongside French workers who had come from every region of the country. All the testimonies collected highlighted the remarkable camaraderie that pervaded the site and praised the qualities of the foremen who “had been around and knew how to manage things”. “The highly contagious collective enthusiasm” observed by a journalist on the site was aided by good wages: the workers didn’t count their time and often carried out work that was both difficult and dangerous, but given the situation of the time, they were very well paid. Furthermore, every fortnight, on pay day, itinerant merchants set up their stalls in Génissiat to sell clothes, shoes and other items and thereby take advantage of the plentiful cash generated by the site. The magnet of wages was further supplemented by CNR’s attempts to accommodate and house the workers that necessarily came from outside the locality: initially, Génissiat was a mere hamlet with only thirty inhabitants. Little by little a real new town sprang up since, contrary to the large dams in the Alps where the construction workers were housed in contemporary homes that were moved from site to site, the workers of Génissiat enjoyed buildings built to last. Very quickly the hamlet became a small town with shops, hairdressers and a library, not to forget its fifty-two bars! Now when strolling through the town one can see names and other traces of those who came to work there.

However, it shouldn’t be forgotten that the difficult topography of the site, the sometimes unsure mastery of new techniques and the need to build the structure in record time occasionally led to accidents and the loss of human lives. A plate fixed in front of one of the doors of the plant renders homage to those who died.

Note: Text is drawn from the booklet *C N R Génissiat The Assertion of an Ambition by Christian Sadoux, plus Glossary of technical terms (55 pp.). It follows a visit and conducted tour of the CNR Génissiat Hydropower Dam site on 26 March 2019