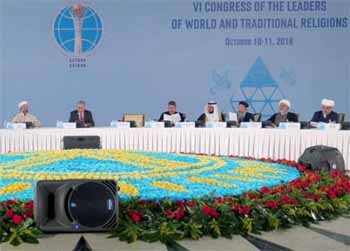 Astana is sometimes called the Dubai of the Steppes because of its modern buildings. In December 1997 this new and vertical city on the Ishim River replaced Almaty as the capital of Kazakhstan.

Astana’s symbol is the Bayterek Tower. This 97-metre-high monument, built in 1997, resembles a giant football like the World Cup trophy. The glimmering ball at the top is a tribute to the legendary Samruk, a bird that is said to live only in Kazakhstan and that lays golden eggs. Bayterek is, according to legend, the tree of knowledge.

At the top of the tower, visitors can place a hand in the hand print of President Nursultan Nazarbayev, molded in a metal block. The top of the tower offers a view onto the new business centre and the blue-domed presidential palace. As far as the eye can see there is steppe – no trees, and it starts right outside the town.

The manna from its petroleum has allowed Kazakhstan to construct original buildings with little consideration for the expense. One of the internationally renowned architects whose design is evident in the capital is Briton Norman Foster whose eye-catching work can be seen in city hall in London, Berlin’s Reichstag and Honk Kong’s airport. Foster had been mandated to design the Bayterek tower – the designer, however, was President Nazarbayev himself. Some of Foster’s architectural flagships in Astana can be seen in the KhanShatyr building, a commercial and leisure centreshaped like agiant yurt, and the five-floor high Peace Pyramid where in October the Congress of World Religions took place.

Leaders of different religions decided to collaborate with governments, international organizations and civil society in solving conflicts and contributing to worldwide stability. They committed themselves to support for political solutions to armed conflicts, as the final declaration stated, including acting as mediators between conflicting parties.

“We as religious leaders need to work with our governments to take this commitment seriously and take action,” Archbishop UrmasViilma from Estonia said on behalf of the Lutheran World Federation speaking to the 82 delegations from 45 countries. “Cooperation is needed today, not isolation.”

The theme of the Congress “Religious Leaders for a Secure World” was a reminder that in a world marked by insecurity and injustice, religious leaders need to take responsibility and jointly contribute to the wellbeing of all, Viilma explained. The holistic approach to “human security” is also reflected in the UN Agenda 2030 for Sustainable Development (goal number 16), he added: “Promote peaceful and inclusive societies for sustainable development, provide access to justice for all and build effective, accountable and inclusive institutions at levels.”

Representatives of different religions, among Christians – Catholics, Lutherans, Orthodox churches – including for the first time also the Coptic Orthodox Church from Egypt, as well as Jews, Muslims, Buddhists and Taoists emphasized the importance of a common dialogue for mutual understanding and confidence.

Separation of religion and politics

The head of the Vatican delegation, Cardinal Francesco Coccopalmerio, saidthat to avoid ambiguity and mutual instrumentalization, religion and politics should remain distinct. While Ovadia Yosef, Sephardi Chief Rabbi of Israel, pointed out, that – according to his experience – almost all conflicts are the result of the inability to listen.

Mixing religion and politics can be problematic, as was demonstrated by the fact that coinciding with the Congress in Astana, in Istanbul, the Ecumenical Patriarchate whose head is Bartholomew I said it was ceasing its condemnation of leaders of schismatic Orthodox churches in Ukraine, a step towards establishing an ecclesiastically independent – or autocephalous – church in Ukraine.

Ukraine’s President Petro Poroshenko hailed the announcement, while the Russian church denounced it. Since the late 1600s, the church in Ukraine has been formally under the jurisdiction of the Russian Orthodox Church but calls for its independence increased since Moscow’s 2014 annexation of the Crimean Peninsula from Ukraine.

“Religious diversity is strength, not a weakness,”said Swiss diplomat Thomas Greminger, Secretary General of the Organization for Security and Cooperation (OSCE) at the congress. In many countries, xenophobia is increasing, he said. Some are going so far to draw a line between national religions and others and claim, the latter are a danger for the country. “Such ideas are erroneous,” he said.

The religious leaders also decided at their congress to support and respect religious diversity and counteract provocations of pseudo-religious rhetoric inciting hatred and extremism.

In their declaration they called upon politicians and media to renounce the associating of terrorism with any religion, “as this is false and offensive to our religions and harmful to peaceful coexistence, which undermines mutual trust and cooperation within and among different religious communities”.

The Grand Imam of Al-Azhar Mosque in Cairo, Ahmed Mohammad al-Tayyeb, said “Terrorism is not made by Islam, Christianity or Judaism, but it is made by policies of super powers which are unjust.” With his words the highest authority of Sunni Islam echoed Pope Francis who reiterated in recent years on several occasions that “terrorism grows when there is no other option and when money is made a god and it, instead of the person, is put at the centre of the world economy”

Congress participants emphasized the importance of taking action for their aims. As a first step, they decided on the opening of a centre for inter-religious dialogue in Astana that will serve as a hub for reconciliation and peace building.

“There are people who know each other, who love each other and cooperate. This platform is important, and it comes from a credible country in terms of respecting the religions,”Monsignor Khaled Akasheh, head of the Islam Office at the Pontifical Council of Interreligious Dialogue told DIVA.

Kazakhstan society is made up of 18 million people, representing more than 100 ethnic groups, and 18 religious’groups in which Muslims are numerically to biggest group.

Regarding the outcome of the Congress Archbishop Viilma said that if authorities meet on a regular basis, it helps them to seek mutual and common things. As an example, he mentioned the ecumenical cooperation of 10 Christian denominations in Estonia. “When key persons regularly come together, they start to understand each other better, they even become friends,” he told DIVA and he noted, there is a common message of peace, love and justice in every religion.

Since the first Congress of World Religions 15 years ago, participants said there has been progress. The first congresses disagreed on many issues or the participants didn’t understand each other’s content. At the beginning, some of them wouldn’t sit at the same table, for example the Ayatollah of Iran and the Israeli’s chiefrabbi had problems with that, according to a participant.

“This is a gradual process,” Kazakh Deputy Foreign Minister Yerzhan Ashkibayev said at a press conference. “It is a big success in that the participants are talking (now) about peace and cooperation.”

President Nazarbayev pointed out at the Congress that Astana had already been known as a place for peace negotiations. Among other conferences talks in the capital were those between Turkey, Russia and Iran that have taken place in Astana to put an end to the war in Syria.