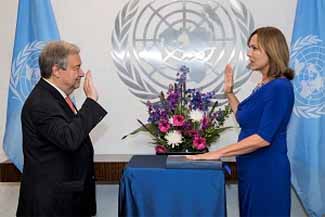 She is one of these persons you like as soon as you meet them. Ms Algayerova has a long and impressive career. A positive woman, she is also hard working, and she sets her standards high, for herself and perhaps for others. We had the good fortune to meet with her, a year after her arrival in Geneva.

It was really an honor. I was very happy because it had been my dream for a long time to work in the United Nations. Secretary-General Antonio Guterres has made gender parity one of the cornerstones of his mandate and has achieved it for the first time in the UN Senior Management Group. Deputy Secretary-General Amina Mohamed is also taking a more prominent role than many of her predecessors.

Q: Could you tell us a little about yourself ?

I am a Slovak national. I studied economics in Bratislava, then after some years I did an MBA in London, and finally I coursed a Masters’ in Contemporary Diplomacy at the University of Malta. I have worked in foreign trade and international relations. After the political changes that took place in my country, I started working for a Spanish company. I was in fact the CEO of a big Spanish company, and then I was hired by the biggest Slovak pharmaceutical manufacturer as head of their export department. In that capacity, I established 73 offices abroad. It was one of the most successful endeavors of my life. It was new and creative because I was building something new. The company was later merged with an even bigger pharmaceutical manufacturer.

Then, Jan Kubis called me and asked me to come and work with him as his deputy foreign minister. So I suddenly switched from economic diplomacy to real diplomacy for my country. I served two years with Jan Kubis, and another two years with his successor, Miroslav Lajčák. After that, there was a change of government, and I set up my own NGO for the United Nations Development Goals. We were working a lot for women’s and children’s rights. For example, I personally worked two years on implementing the United Nations Convention on the Rights of the Child in Georgia. After that experience, I was appointed foreign adviser to the Prime Minister for about six months. After these six months, I was appointed Permanent representative to the United Nations and OSCE in Vienna, and I stayed there for five years before coming to Geneva.

Q: What are your main objectives for the UNECE ?

I was hired by the Secretary-General who came to office with a big reform program, so, my first action is to support him. I feel it’s necessary to reform the whole United Nations, and this implicitly affects the UNECE because we cannot continue doing the same things we used to do 30 or 40 years ago. However, reform does not necessarily mean cuts, it can also mean growth. Then you start to think about it all. What is it all about? Are we doing the right things for member states, for people? The objective of the reform is to make the UN more efficient so that we can better support our Member States in implementing the 2030 Agenda for Sustainable Development. Achieving the SDGs will be a major challenge requiring continuous efforts and the integration within national programs and strategies of the agreed objectives. There is still progress to be made on this front. It will also require accrued international cooperation, given the global nature of many of the issues that cannot be solved only at national level. I would mention climate change, reducing inequalities and anticipating the impact of ageing societies as three of the main challenges our region is facing.

Q: Do you have a different approach on reform from others ?

Well, you have to reform, stay focused, and then do the things that are relevant. If you do not provide the relevant things, the cuts arrive. On the other hand, donors will follow if you come up with relevant projects.

Q: For me it seems like you are doing it very business-like. It’s like the member states are your clients.

Well, that is exactly what it is, however, we have our vision as well.

Q: The UNECE is a very technical organization focused on lots of specific technical issues, rules and regulations. How does this play into it? Does it make it more difficult to be innovative ?

I would not say more difficult, as we have professionals working in the organization. They need to make the most of their real expertise, to work together and be the avant-garde. It’s not easy of course. We do not cover the whole range. Some people do not like the word niche, so let me put it this way. In the field of environment we do not cover everything, but the issues that we do cover are very important, and some are not only regional issues but global issues, like water cooperation or air pollution.

I think that the UNECE is a very good organization, but of course we need to do better. Innovation and progress today are moving so fast that you need to move fast too. This is the reason why you also need to go into new areas, and that means that you have to phase out of all the obsolete and non-relevant issues. I see that as my managerial task.

There are two angles on this issue. We have networks of experts and in-house professionals. When I said that we are working in quite narrow areas of expertise, in those areas people know well what we are doing. I think we should work more politically here. The experts know us because we work together. We have a network of some 18,000 experts. The question is: does your Foreign Minister know about us and our activities? Perhaps not, so this is what we are working on.

Q: I just recently heard that you even have experts on forest management.

Yes, and in this field we collaborate closely with the FAO.

Q: What are the others UN organizations that you are collaborating with ?

We collaborate for instance with WHO, with WIPO, with UN-Habitat or with UN Environment, to name just a few. And we collaborate with many other organizations outside of the UN, such as the IRU, in the field of transport.  We have so many organizations with which we collaborate that it would be too much to list them all here. We are also collaborating with many universities and the private sector around the world.

Q: Could you tell us something about the Water Convention ?

It was originally a regional convention for Europe and Central Asia, but it has now been open to all UN Member States. Chad and Senegal were the first countries outside our region to become Parties in 2018, and many more have expressed their intention to join.   This is an example where one of our regional conventions is becoming global.

Another example is that, with the engagement of our sister regional commissions in the UN, our conventions can inspire other regions. Our Aarhus convention on environmental democracy is one example. Latin American countries have looked at our experience, have negotiated the Escazú Agreement, and are now going to ratify it.

Q: So you are a kind of innovating hub ?

This is what I tried to indicate.  On some key issues for sustainable development such as transboundary cooperation, resource use, pollution prevention, sustainable transport, etc., we have decades of experience, which can be shared with others.

Q: You talked earlier about donors. Are they generous towards you, or is it difficult to raise money for your projects ?

One thing is to raise money, and another thing is to have the capacity to absorb it. So, I think we could do more but not much more with our current staff numbers. We are 188 people in the organization, and we use about 180 consultants.

Over the last years, our budget has been cut, and cut. We will see what the next one will bring. I wish that we could have more in-house experts.

Q: You have recently created a UN Trust Fund for road safety. Could you tell us more about that ?

We are very happy to host the UN Road Safety Trust Fund. It was established in April 2018 by a General Assembly resolution. Since that time we have done quite a lot. The fund needed some constitutional documents, and we have had our first two meetings of the Advisory Board and the Steering Committee. These two bodies are broadly representative, not only of the UN organizations, we have the private sector, NGOs, academia and of course Member States from all regions because it’s a global initiative. The Fund has just approved five pilot projects for a total of approximately USD 1 million. These 5 projects will address key components of national road safety systems in a number of low- and middle-income countries, which constitute the target of the Fund.

Q: Will the secretariat be based here in Geneva ?

Yes. Here at the UNECE, we are the custodian of the UN Road Safety Agreements, and we host the secretariat of UN Secretary-General’s Special Envoy for Road Safety, Mr Jean Todt. Now we will establish the secretariat of the UN Road Safety Trust Fund. All the Regional Commissions cooperate with us. You know, everybody talks about the number of persons who die annually of malaria, but nobody talks about the deaths from road accidents, which kill more than twice as much as malaria. So there is a lot of work to be done. We need political support, money and the private sector. Everybody needs to be engaged in this issue.

Q; Listening to you talk about the way you work, I get the impression that you are drawing a lot on your experience from the private sector. But now, my final question: how is it to be a woman among all these men ?

We’ll need to attract more women, to achieve gender balance. We need to work more for women’s empowerment. At UNECE, we have reached gender parity at senior levels some years ago, so we are doing pretty well.  But most importantly, all these efforts will have to be sustained over time! That’s the real challenge. Even in our region there is a lot to do! Our statistical division calculated that women in our region earn 28 % less than men on average. This means not only lower wages but also lower pensions, and higher risks of poverty. This is simply not fair! 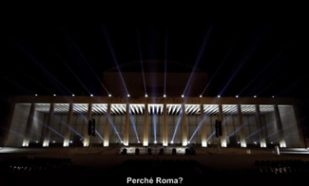