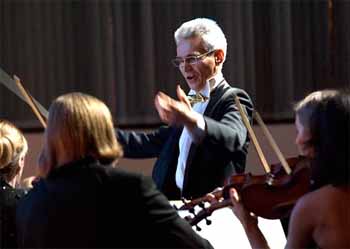 When Maestro Makarenko was appointed as UNESCO Artist for Peace it was “in recognition of his commitment to promote music as a vehicle for dialogue and mutual understanding among people, his contribution to peace and tolerance, notably through the performances of the Kyiv-Classic Orchestra, and his profound commitment to the ideals and aims of the Organization [UNESCO]”.

We had a chance to meet with him during the Maqom Art International Forum, in Shakhrisabz, Uzbekistan, in September this year, and we were curious to learn more about him and his art. So, now we will leave the floor to Maestro Makarenko.

Q: Mestro could you tell us a little who you are ?

My name is Herman Makarenko, and I’m a UNESCO Artist for Peace, an ambassador at large of Ukrainian culture, a conductor of the National Opera of Ukraine, the artistic director and chief conductor of Kiev Classic Orchestra, a doctor and a professor. I teach l music at the National Academy of Kiev, Ukraine.

Q: Where does your interest in music in general come from ?

I was born into a musical family. My father was a lead opera singer, a tenor, and my mother was a ballerina, so, since my early years I have been acquainted with opera, operettas and ballet.

Even my name comes from an opera, thanks to my father and his favourite role. My father sang the great tenor roles in many of the well known operas such as Lenski in Eugene Ogenin, Cavaradossi, in Tosca and in Herman in Tchaikovsky’s The Queen of Spades. This last was one of my father’s preferred roles. When I was born, in Ukraine, my father was on tour, performing in other cities in the former Soviet Union. My mother and grand-mother sent him a telegram saying: “Our congratulations. A son has been born. What should we name him? Nicolas, Michael…”  Father replied “Congratulations! His name can only be Herman.” So, thanks to Father, to opera, to music, I have my name and my life.

I was born almost backstage at the opera. My mother continued to perform on stage until the sixth month of her pregnancy. She told me about it when I grew older. I was living with my parents, and we went on many concert trips together. One could say that I almost lived in opera houses, in Georgia, Belorussia, Ukraine. In other words, I was born into the world of operatic music, and I dreamt only about opera theatres when I was a little boy. In the beginning, I started to play the piano and dreamt about performing together with opera singers. I did not know that I could become a conductor. For me conductors were celestial beings sitting in the sky, looking down on the orchestra, coming down to conduct the orchestra, and once the performance was over, returning the sky. I thought that they were citizens of another world!

[Maestro is a humble man so let us briefly mention that Maestro Herman Makarenko attended the Mykola Lysenko Music School and the Tchaikovsky Kyiv State Conservatory where he studied piano. By the age of 29 he was already a prize winner in a Soviet young performers competition.]

After I finished the National Music academy in 1990 I began to teach there.

Q: Most people including myself wonder what one feels when you conducting an orchestra.

Ever since the very beginning I have felt like a man from space without gravitation. I swim in the air, in feelings and emotions. It’s my personal impression. I have written scholarly papers. In the former Soviet Union, we had to do a doctoral dissertation, and before that, we had a PhD candidate dissertation. My first dissertation was in philosophy, on irrationalism in the questions of irrestatic music in the nineteenth century. It is Schopenhauer, of course, classical German philosophy and prior to German philosophy. After that one, there was the doctoral dissertation, which made me a doctor of philosophy, and I’m also a doctor of musicology. My second dissertation was about the creation of conducting in a multi-integration version – not only museology, in arts, in ethics, but in all different fields. It involved a lot reading and work – dissertations, articles, monographs etc. In the end I said to myself, « How can I say it simply, in simple sentences about conducting ? »  Therefore, I came up with the following.

What is conducting ? You go to the podium and you have to put fire into the spirit in the orchestra, and to switch on the musicians. With the philharmonic orchestra, I switch on all the participants. After this we have a very high temperature. This we can put into the hands of the public, thus switching on the public. After all this, it’s like a nuclear explosion and we get a lot of applause. You see, today the public comes to listen.

Today we have a very high technical level, and we can tune in to google or youtube to hear any interpretation of any piece or performance. But people buy tickets and go to listen to the philharmonic, to the opera house, because they would like to experience fresh emotions. The conductor must put these emotions, this fire, into the orchestra, all together, and it is only then, when we are all together, that we can give it to the public.

Q: Where do you get the inspiration from to create this kind of fire ?

It’s a very interesting question and a very difficult one to answer because it’s very important that artists have silence and peaceful surroundings. Then, I feel that there are good feelings inside my head. Nine years ago, I received a gift from God, my twins, son and daughter, so right now it’s very difficult to be alone and get the silence. But life is life, and I try to find inspiration in the contact with my wife, with my children. Right now, here in Uzbekistan, Scarcizhabs, I enjoy walking. So, now I walk between 40 minutes to an hour. Therefore, I am born and reborn during my walking.

More important is our nervous system. I have told my wife that being a conductor is really a dangerous job. Why ? Simply because it’s all about emotions. When you want to give emotions to the public, you share yours, but you cannot share it all. If I have, let’s say, an emotion ranking at the top of a scale of 100, the public will perhaps receive 50 or 60. We have a lot of emotions every time, so, we need to be “re-born” and to reconstruct our nervous system. Let me explain. I will be leaving here on 10 September as I will conduct the Kiev Orchestra and then I will start to rehearse for the next performance. During the season, it’s very difficult, but life is life.

Q: You are a UNESCO Artist for Peace. Why did you accept this position ?

UNESCO Artist for Peace is the title given by the Director General of UNESCO. I have had the honour of receiving this title from Irina Bukovina. It is not only a matter of a title, but of prestige. I need to fulfil my obligations The goals of the organisation are peace, goodness, understanding, tolerance. These are very important in our modern world. In the twenty-first century, we struggle to understand each other. We need to understand each other, to respect each other so that we can live together, and this is the only way for the future of humankind. Maybe some people do understand it, maybe others don’t, but we know that we can live in peace only by understanding each other. In this case, culture is a very important instrument for understanding – a sort of soft power between countries. I respect politicians, diplomats etc., but culture today is the most important element to me.

Culture and music are in my opinion the languages that least need a translator; they are independent of race, colour, region, gender, age, politics. I can understand because three times we have celebrated the anniversaries of the United Nations, 60, 65 and 70, and we played the music of all the continents. When I received the title of UNESCO Artist for Peace, I led the Chamber Orchestra in the UNESCO headquarters in Paris, and we played music from different continents.

In June this year, we did the same, and then some people came to see me telling me that they remembered our last performance. It went very well. We presented music from Australia, North America, Africa, Oceania and of course Europe. You see, the cultures of different countries are so different, but the difference is so nice, it is beauty. Every country has its own beauty. It’s like flowers. A rose is beautiful, but one flower is not better than any other. They are different types of beauty.

Q: Why did you accept to come here to Uzbekistan to attend this forum ?

We know that music is the spirit of people. They say that Maqam is music of the spirit, and thanks to Maqam we can know and open ourselves to the spirit of Uzbekistan and their people. This spirit is in my opinion so beautiful, so rich, and this international forum of Maqam art is a great event in culture not only for Uzbekistan but for the culture of the entire world. Guests from 70 countries, from different continents of the world have said that this is a forum of friendship and forum of peace.

Q: Finally, do you have a message for our readers ?

I would like to say that the most important thing in modern life is peace. I would like to ask all the world’s diplomats to do everything they can for peace. It is very important because we have children, grandchildren. We have to let them grow, and one instrument for guiding them as they grow is music.

UNESCO Artists for Peace are internationally-renowned personalities who use their influence, charisma and prestige to help promote UNESCO’s message and programmes. UNESCO works with these distinguished personalities to heighten the public’s awareness of key development issues and inform it of the Organization’s action is in these fields.

As well as performing all over the world, Mr Makarenko has published important works including a monograph on Music and Philosophy: Schopenhauer, Wagner, Nietzsche and another, The Conductor’s Creative Work: The Dimensions of Aesthetics and Art History, as well as a manual for higher education students.

As a promoter of cultural diversity, Mr. Makarenko’s musical repertoire spans folklore and classical works from North and Latin America, Asia and the Pacific, as well as those of Europe and his own region.