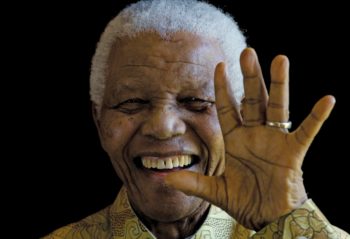 “We can change the world and make it a better place. It is in your hands to make a difference” – Nelson Mandela.

Today, July 18, is the annual International Nelson Mandela Day. The United Nations headquarters in Geneva organized a huge event for the international community with representatives of the diplomatic corps and other dignitaries. The ceremony took place in a packed Human Right Council Room gathering several hundred persons. It was a joint event organized by the United Nations Information Service, the Africa Group of Ambassadors in Geneva and the permanent mission of South Africa.

« Today is a special day, » said Ms. Alessandra Vellucci, Director of the United Nations Information Service, in her opening remarks as the moderator of the event. « Today we are celebrating the one hundredth anniversary of his birth. » The ceremony then got under way with a video of Nelson Mandela delivering a speech at the United Nations. Next was Mr. Antonio Guterres, Secretary General of the United Nations, who in a video message stressed the achievements of Nelson Mandela. Mr. Clemens Adams, the director of administration, delivered a speech on behalf of Mr. Michael Moller, Director General of the United Nations Office at Geneva, who stressed that we all have a role to play. His Excellency Mr. Dieudonné W. Désiré Sougouri, Permanent Representative of Burkina Faso to the United Nations in Geneva and chair of the Africa Group in Geneva launched an appeal for the tolerance and respect for cultural diversity. Janet Nelson, vice-president ATD Fourth World, a NGO combatting poverty, delivered a long intervention, and told us how Nelson Mandela’s book had inspired her to work for poverty alleviation.

The United Nations Jazz Club then performed two songs after which the Honorable Mogoeng Mogoeng, the Chief of Justice of South Africa, delivered a highly appreciated and very impressive speech. The audience was delighted and gave him a standing ovation. The last speaker of the event was Her Excellency Ms. Nozipho Joyce Mxakato-Diseko, Permanent Representative of the Republic of South Africa to the United Nations Office at Geneva, who told us how they are going to celebrate this event in South Africa. The whole event concluded with another musical interlude by the Jazz Club. Altogether, it was an impressive event.

The United Nations officially declared the day in 2009, and the first Nelson Mandela International Day was observed on 18 July 2010. Nelson Mandela was the embodiment of values such as freedom, equality and respect, values that we need to embrace as we aspire to a brighter future that we hope to be marked by world peace and harmony.
Every year on his birthday, the United Nations joins a call with the Nelson Mandela Foundation to devote 67 minutes of time to helping others as a way of honoring his good deeds throughout the world and encouraging individuals, communities, governments and non-profit organizations to take one small step towards the larger leap of making a positive imprint.