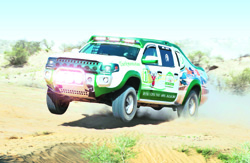 Today, Turkmenistan is becoming the most important transport hub of the region, becoming a major international logistics center due to the favorable geographic location and constructive foreign policy of President Gurbanguly Berdimuhamedov, which puts forth current proposals for cooperation with foreign states and takes consistent steps to implement them in practice.

The Turkmen Desert Race « Amul Khazar 2018 » is a unique sport event held within the framework of the motto « Turkmenistan – the heart of the Great Silk Road ». Participants of the rally will have a unique opportunity to drive along the ancient paths of the Great Silk Road. The time of the race is from 9 to 15 September 2018. Currently, the preparation for the forthcoming race is in full swing, work is underway to develop the race route, experts with many years of experience are involved, cultural events timed for the rally are being prepared.

The organizers of the race are making every effort to simplify the formalities of participation as much as possible, and an expanded cultural program is being prepared. The route of the race will include the unforgettable natural landscapes of Turkmenistan, including the Karakum Desert, the plains, and the mountainous terrain, with the finale on the pearl of the Caspian Sea – the tourist zone “Avaza”.

The special status of this large-scale motor sport project is attached to the fact that President of Turkmenistan Gurbanguly Berdimuhamedov not only put forward the idea of these competitions, but personally patronizes its implementation, from organizational issues to practical actions. The head of state himself, even as a pilot of a sports utility vehicle, tested the motor racing tracks in the Karakum Desert. This was in February of this year during the start of the mass competitions « The Great Silk Road » in Lebap province and more recently, in May, during the qualifying round of the rally « Amul-Khazar », which was held near Ashgabat with the participation of domestic teams, and where the Turkmen leader again showed a brilliant result.

The sports part of the event will be organized by the legendary French racer Jean-Louis Schlesser, the organizer and head of the rally « Africa Eco Race ».

The start of the race will be given in the town of Amul, (Turkemenabat city), in ancient times it was one of the points of the Great Silk Road, then the route lies along the picturesque and mystical Karakum Desert. In the stands participants will be expected hospitality, unique dishes of Turkmen national cuisine, culture and much more.

In the course of the route there are parking lots on unique natural landscapes such as Darvaza (the gas crater, the flame in which does not go out for 47 years), the Turkmen Lake – a unique pond in the middle of the desert, red sands and rocks in the town of Gyzylgaya, as well as the pearl of the Caspian Sea – the National tourist zone “Avaza”.

The participation is allowed for the cars, trucks and quad bikes or ATV of SSV class. The route of more than 1500 kilometers is laid through the Karakum Desert, as well as through other picturesque places of the country. Special sections of the rally do not exceed 250 km.

Thus, the crew members will travel from the east to the west of Turkmenistan, repeating the historic route of the Great Silk Road, and like the ancient trade caravans they will cross the vast expanses of the legendary Karakum, overcome the most complicated parts of the desert, and also see other unique and unrepeatable places of the Turkmen land, having made a symbolic journey from the past to the present.

However, Karakum Desert is the heart of the project.

First of all, this greatest after Sahara desert of the world deserves to take important place in geography of the competitions of the best Dakar class rally racers.

Second, Karakum Desert hide more extreme subjects from adventure point of view – it is not such monotonic as African desert and visually gives more impressions and can surprise at any moment taking into consideration that this is living ecosystem that was not affected by anthropogenic impact. That makes the race to more interesting when people driving powerful vehicles are able to compare themselves with the greatness of nature, as they say face-to-face, and to realize how close the man is connected with it. If one treats the environment as an ally then technical perfectness will be the continuation of the mergence of the nature and civilization.

Third, Karakum Desert as the main part of Turkmen race has to attract the attention of the world community to this model sample of natural protection, which deserves the inclusion to the UNESCO World Natural Heritage List.

It is impossible to say that the Karakums are not developed by human. But the way it is made is thought to be the model of exemplary ecological activity, for example, the construction of man-made Lake Altyn Asyr in the centre of the desert.

This unprecedented by its scale project is very important for Turkmenistan and Central Asia. Its realization not only opens fundamentally new opportunities and horizons for development of agriculture of our country but also would be favourable for entire region.

Recently, the idea to turn one of biggest and most adverse, however the richest by natural reserves desert of the world into blooming oasis would be thought fantastic. But today, it becomes true. Turkmen Lake is unique hydro technical complex, complex system of irrigation facilities designated for the collection of drain mineralized waters from agricultural fields of all regions of the country. It will allow fundamentally improving the conditions of irrigated lands, solving many problems related to the soil salinization, swamping and drought.

It was repeatedly highlighted by Head of the State Gurbanguly Berdimuhamedov that every part of Turkmen land deserves the most careful treatment. In particular, it is related to Karakum Desert that is unique, centuries-old ecosystem, which landscapes and sub soils contain unique flora and fauna, colossal natural reserves, vast pastures, considerable recreation resources, huge reserves of hydrocarbon material and natural reserves.

Today, Central Karakums are one of natural phenomenon of Turkmenistan that has no analogues in the world in the aspect of landscape, zoological, botanical and ecological studies of plain and desert ecosystems where pristine nature of the desert remained almost without any changes.

Thus, the crews will drive from the east to the west of Turkmenistan following historical route of the Great Silk Road and will cross vast spaces of legendary Karakums like ancient trade caravans; they will go over the most complicated parts of the desert as well as will see other unique places of Turkmen land, having made symbolical journey from the past to the present.

Big preparation work is carried out in Turkmenistan for this event. The development and implementation of online registration system of the participants of the race are on the final stage; website of the rally is planned to be opened.

Today, the work on organization of bivouacs, cultural support of the event and training of personnel are expanded in the country. Modern equipment, aviation and other supporting resources for organization of the rally will be at disposal of the organizers of the event. Many other measures are planned as high-level reception of numerous foreign delegations is the honour for our country. The example of this is V Asian Indoor and Martial Arts Games held in Ashgabat. The practice of the games, volunteer, technical and service personnel teams will be good support for Amul – Hazar 2018 rally.

General Director of Africa Eco Race rally recollected with warmth in his interview to TDH his trip to Turkmenistan in the beginning of the year and meeting with President Gurbanguly Berdimuhamedov. “I received visual and convincing proof of that undisputable fact that sports in Turkmenistan are placed in the rank of national policy. When the President himself urges the idea of sport improvement of the nation, then there is no doubt in the final result of started changes”, – Jean Louis Schlesser noted.

– As for today, the team of French specialists carried out big work for exploration and preparation of the track of future race, Schlesser said. – The route is divided into five stages and every speedy part hides many secrets and complications for the pilots and navigators of the crews. Services of French specialists for organization of the race include consulting, coordination, and invitation of various sport teams from abroad, attraction of foreign specialists for technical provision of the competitions as well as highlighting of the race in international mass medias.

Turkmen Desert Race has already attracted the attention of International Automobile Federation (FIA). Jean Louis Schlesser presented the project to the FIA Commission of Rally Raids and noted good perspectives for inclusion of the project into the world status series in the future.

According to his opinion, organizers of the competitions have no doubts that the race will be as complicated as interested in the same time and undoubtedly will raise keen interest of the world sport community.

As is known, “Turkmenistan is the Heart of the Great Silk Road” is the slogan of 2018. According to President Gurbanguly Berdimuhamedov, foreign participants of the rally would be able not only to learn about the heritage of Turkmen nation but also to see new life that comes to this legendary places with fundamental social and economic changes, scientific and technical progress and industrial development of the regions of the country, which improves its role of important transport hub on the Silk Road in modern age.

Turkmenistan improves its international authority as the country that has successful experience in organization of big sport events of international level including in motorsport. This experience will enrich such significant project as Amul – Hazar 2018 rally that is realized on the Government level.

The race will give the impulse not only to the development of the motorsport in Turkmenistan but will also support the development of tourism. The Head of the State has already noted the necessity of introduction of new tourist routes along this track that include famous and less known historical and archaeological monuments of our country as well as its natural places.

If once on these places caravan trails passed, crossing the ocean of sand that stretched between the oases of flowering cities, today the first-class autobahns and modern railways lay here. All this, together with « immersing » in the landscape environment, will give tourists a unique opportunity to present both the past and the present of the Great Silk Road, which today thanks to energetic efforts and constructive international policy, active diplomacy of President Gurbanguly Berdimuhamedov is reborn again, connecting countries and peoples.