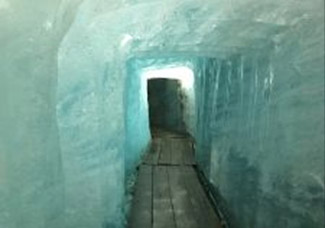 Glacier under the blanket – panacea from the Climate Change? (Visiting the sources of the Rive Rhône so peacefully flown through our City Geneva)

Rue du Rhône in Geneva is one of the most upmarket places in the city and is known to everyone here. Its name reminds us of the nearby river, which many people seem to think comes from Lake Leman. The river Rhône is a major artery of transportation, 380 km long, crossing France to the Mediterranean. Not many people know, however, that before so slowly “arriving” to Geneva it runs, often turbulently, for almost 300 km more. It starts up in the high mountains in the Glacier du Rhône, which is near the famous Furka Pass. I visited this hidden source to give you a more detailed account.

Glacier du Rhône is situated in Oberhoms near Oberwald, above the picturesque town of Gletsch: the Swiss German word for glacier. Gletsch got its name because in the past it was next to a spectacular fall of the Glacier du Rhône; it looked like a huge mass of ice falling to the town. There is historic “Hotel du Glacier”, which has paintings and the photos from times when visitors enjoyed the beauty of the huge “falling” glacier. Sadly, today it is no longer there, and only a ravine reminds us that once it was covered with ice. The glacier receded dramatically, and now can be seen only from the Furka heights. Over the last years it has receded still further, making a growing lake from the “milk of the glacier” white water. The Rhône has therefore lengthened, as it no longer starts at the tongue in the Gletsch; now it is measured from the centre of the middle of the “milk of the glacier” lake.

Glacier du Rhône is not the largest glacier, but it is spectacular. It has another historic landmark – Hotel Belvedere, featured in the James Bond movie Goldfinger. In 1964, Sean Connery was James Bond, chasing over the Furka in his Aston Martin DB5. The hotel Belvedere is a historical and cultural landmark, with historical rooms and paintings, and is where Connery stayed while the movie was shooting.

Today the hotel has been closed for eight years, leaving only the historical glory of the Furka Pass, its steep bends and serpentine road. This last is considered one of the steepest and most beautiful in Europe, bringing adventurous racers on motorbikes or race cars such as the Porsches, Ferraris and Aston Martins I saw during my visit. I recently learned the hotel has now a new owner, and there will be an attempt to give new breath to this antique gem, full of history, legends and mysteries. The Hotel in Gletch is also closed, but there will be an attempt to re-open it in summer 2023, which I hope is successful. Currently, visitors or researchers come to this almost abandoned place to look at the Glacier. Those few in the know will also visit the ice cave, which is not natural but very carefully carved inside the glacier.

The Furka pass is closed in winter and opens only from late May to mid-November, weather allowing. In the spring before it opens, a walkable ice grotto is re-drilled into the Rhône Glacier. This has been done every year since around 1870, and it takes about 4 weeks. Initially it was cut to the left side of the glacier, but now it is on the right, and for four generations it has been cut by the family Carlen who own the land.

However, there are problems with this. The glacier is receding, so the cave must be cut deeper into the remaining part. It is usually 100 metres long, but during the season it can lose 20-30 metres of length, so the gorgeous bright turquoise ice becomes more dramatic, but also more dangerous. There is also a risk of the ice chamber melting from the top, so extra precautions and constructions must be made inside. To diminish the loss of ice and to protect this part of the glacier, the family were pioneers in using a survival blanket – this is exactly how I saw this glacier at the beginning of the season. There have been articles all over the press about how the “Swiss protect their glacier with blankets”, but this is for the first time I saw it. Covering the glacier with a thick fleece blanket is innovative, and aimed at protecting the glacier from quick melting. The inventor is convinced that it helps, saying that without the blanket it could indeed lose up to 20-30 metres or more during the hot season, but while covered it retains up to 70 per cent. The fleece blanket is an expensive innovation and very difficult to fix it on the glacier, but it seems to work and is not too bad aesthetically. It does look somewhat weird, but that can be lived with if it protects glaciers.

This method deserves study, and has started to be used to protect other glaciers. However, it is not a complete remedy, as some glaciers are high or in inaccessible areas, or have a steep incline, making cover impossible. However, when it can be used the method seems efficient, and even though it is only a partial remedy and panacea it could help save the glaciers for a while longer.

As, for the time being, it is saving and guarding the sources of the Rhône river. As this part of the glacier is in private hands, the family can decide to invest in it, but the destiny of other glaciers is more precarious. The increase in hot summers, like this year’s, has led to such a decrease of the glacier surface that some have broken into parts, something which has never been seen before.

Of course, putting the blame for receding glaciers on climate change has opponents. There have been revolutionary studies conducted by Zurich university which conclude that climate change may not be to blame, or not wholly so, and that for example, in 1940, with a relatively cool summer, the glacier level was even lower. The evidence is in the form of the much-publicised discovery of the remains of aircraft and people in the melted ice. These were at a much lower level than expected, showing that the glacier was already much lower than thought. This is a puzzle for scientists to explain, but it is an undeniable fact that the level in 1940 was much lower than it was this year. Some people believe that glaciers develop by their own rules or cycles, and if this theory is correct there is hope that part of the glaciers can return or even increase to their previous size. Time will show if it is this or climate change and temperature increase which affect the glacier’s size and level.

For now, we know we owe the survival of the Glacier du Rhône and its cave to one family, guarding the Glacier du Rhône with a blanket. We can hope that this Glacier will be preserved better than the others, letting the river Rhône bring its turbulent waters almost 300 km across Switzerland to Lake Leman, flowing so sleepily past the banks of our peaceful city of Geneva before becoming again a huge river feeding France and the Mediterranean. 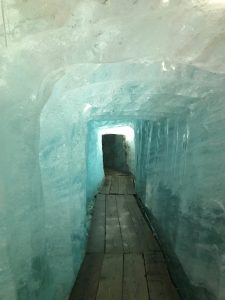