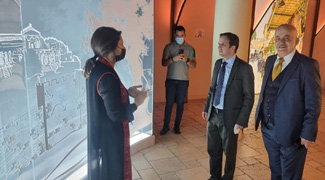 Palestine: a land of history and promise at Expo 2020 Dubai

The well-known Palestine outlet called Janobiyat widely informed about this visit and highligthed that both the President of Palestine, Mr. Mahmoud Abbas, and Minister of Foreign Affairs of Palestine, Mr. Riad Malki, welcomed this visit, as well as, also expressed its support to the UPEACE mandate.

Represented UPEACE by Ambassador David Fernández Puyana, Permanent Observer of UPEACE to the United Nations and UNESCO, the visit shows how Palestine is a deeply historic land with ancient buildings. Along with its burgeoning tourism, it has a busy manufacturing sector and there are many opportunities for investment.

During the visit,  visitors discover that the name “Palestine” originally comes from the word “Philistia,” which refers to the Philistines who occupied part of the region in the 12th century. Throughout history, Palestine has been ruled by numerous groups, including the Assyrians, Babylonians, Persians, Greeks, Romas, Arabs, Turks, Crusaders and Egyptians. The region was among the earliest in the world to see human habitation, agricultural communities and civilization.

The visit also allows all visitors to take an elevator ride that’s a simulation of rising high above the bustling streets of Jerusalem, the City of Peace.  Also everyone could discover opportunities in manufacturing like cement, textiles, soap, olive-wood goods and food, as well as, see the sights of Palestine, inhale its aromas and taste its delicious cuisine.

Located in the old city of Jerusalem, the visit explains why Al-Aqsa Mosque is the third holiest site in Islam. Modern Muslims believe that Muhammad was transported from the Great Mosque of Mecca to this location during the Night Journey. Islamic tradition holds that Muhammad led prayers towards this site until the 16th or 17th month after his migration from Mecca to Medina.

Located in the Expo theme called “Opportunity”,  all visitors discover a new and vibrant Palestine. A land of history, future and promise where its people and neighbors want to live in peace and harmony with all their brothers and sisters. Based on the values represented by the United Nations, peace should prevail over fear, hatred and violence. Through innovative solutions based on dialogue, innovation, empathy, justice and cooperation, inhabitants of this land will be able to live and to dream in a better society plenty of hope for the new generations to come regardless of faith and religion. 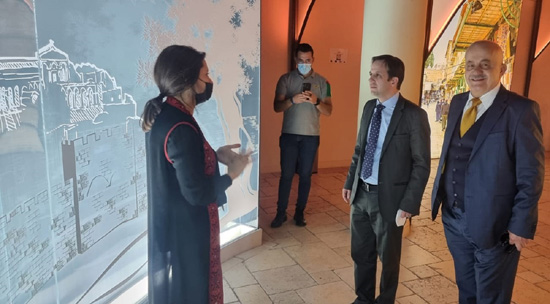