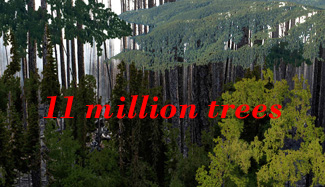 With a pledge to plant almost 83,000 new trees, Moscow became the first city in Russia to officially commit to the initiative launched by the United Nations Economic Commission for Europe (UNECE) in 2019.

As one of the world’s megacities with a population of over 12 million, Moscow is globally renowned for its architecture, historical sites, but too, its vast green spaces, parks and forests. The city not only ranks highly for the total area of green and recreational facilities per capita, but also their accessibility: some estimates suggest that around 90 percent of residents live within walking distance from such areas.

Over the last decade, the local government worked with citizens to plant over 2.5 million trees and shrubs in a large-scale landscaping programme “Million Trees” launched in 2013. Now, under the “Trees in Cities Challenge”, the leadership of Moscow has committed to adding new trees to its parks, squares and courtyards, and increasing monitoring of its urban canopy to counter the outbreak of pests and diseases.

Mr. Sergey Cheremin, Moscow Government Minister and Head of the Department for External Economic and International Relations of Moscow, said “For many years Moscow has been striving to improve the well-being and comfortable living of its inhabitants. Our participation in “Trees in Cities Challenge” confirms Moscow’s intention to evolve in urban greening and become one of the modern leading capitals in creation of favorable environment.”

UNECE Executive Secretary, Ms. Olga Algayerova, said “Mayors and urban leaders can play a pivotal role in joint efforts to deliver on the Paris Agreement. Localized climate action can have immediate impact on the ground: a single tree can store up to 150 kg of CO2 per year, while trees also regulate urban temperatures, help limit erosion and flooding, and increase biodiversity. I welcome Moscow’s strong commitment and encourage urban areas of all sizes to join the Trees in Cities Challenge”.

Despite delays and restrictions associated with the outbreak of the COVID-19 pandemic, more than half of the entrants confirmed that they met, or exceeded, the target of their pledge. Some of the participating cities, such as Helsingborg, decided to continue with the initiative into 2021, and on top of their previous pledge, plant 8,000 new trees this year.