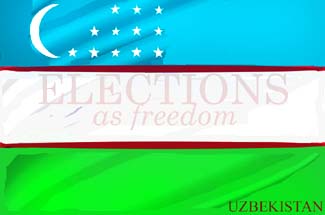 Elections are a constitutional tenet of democracy, and democracy is the expression of the power of the people; it is the will of the people; it is the realization of rights of everyone to elect and be elected to representative bodies of state power. Free elections held on the basis of universal, equal and direct suffrage via secret ballot are an integral part of a democratic state governed by the rule of law.

As part of the Strategy of Action across five priority areas for development of Uzbekistan over the period 2017-2021, extensive work is being done in the country to ensure the protection of civil, political, economic, social and cultural rights and freedoms of citizens and to implement the most important constitutional principle proclaiming, « the ultimate value is the human being, human life, freedom, honour, dignity and other inalienable rights ».

Over the last three years, systemic measures have been implemented to bring national legislation into line with international human rights.Among is work has been the Ratification 4 ILO conventions and Constitution of IOM as well as the adoption of four new codes, more than 160 laws and more than 1,200 presidential decrees and resolutions.

Today, the provisions of more than 70 major international human rights instruments to which our country is a party have been incorporated into the articles and provisions of the Constitution of the Republic of Uzbekistan and national legislation. Among them, the Universal Declaration of Human Rights, the International Covenant on Civil and Political Rights, the Convention on the Political Rights of Women, the UN Convention on Elimination of All Forms of Racial Discrimination, as well as the Declaration on Criteria for Free and Fair Elections, the Document of the Copenhagen Meeting of the Conference on the Human Dimension of the CSCE and others.

According to international legal documents, “the will of the people shall be the basis of the authority of a government; this will shall be expressed in periodic and genuine elections, which shall be held with universal and equal suffrage and shall be held by secret vote or by equivalent free voting procedures.”

Article 117 of the Constitution states that elections of the president, Legislative Chamber of Parliament and local representative bodies of state power are to be held on the basis of universal, equal and direct suffrage by secret ballot. Citizens of the Republic of Uzbekistan who have reached the age of 18 have the right to vote. Elections are held at five-year intervals.

The Electoral Code, which was adopted by the Parliament taking into account international electoral standards and the requirements for elections, sets out practical mechanisms for the implementation of these constitutional norms and ensuring the political rights and freedoms of citizens, freedom of choice and freedom of thought, speech and opinion.

First, international principles on universal and equal suffrage are enshrined in the legislation.

According to articles 4 and 5 of the Electoral Code, “citizens, regardless of sex, race, nationality, language, attitude to religion, social origin, beliefs, personal and social status, education, type and nature of occupation, have equal suffrage”. Every citizen participating in elections has one vote.

Second, the previous ban on the participation in elections of persons held in places of detention for crimes that do not represent a great public danger and are less serious has been removed.

Now, according to the legislation, only citizens who have been declared incapacitated by a court, and persons detained in places of detention by a court sentence for serious and especially serious crimes do not participate in the elections. In any other cases, direct or indirect restriction of citizens’ suffrage rights is prohibited.

These norms, which are essential to ensure the political rights of citizens, are more democratic than in many OSCE countries, where persons deprived of their liberty are not eligible for election.

Thus, deputies of the Legislative Chamber of Parliament and deputies of local councils are directly elected by citizens.

Fourth, the country’s electoral legislation provides for the implementation of the 1990 OSCE Copenhagen Document, which states that OSCE participating states must “respect the right of citizens to seek political or public office, individually or as representatives of political parties or organizations without discrimination.”

The number of women must not be less than 30% of the total number of candidates for deputies nominated from a political party, and political parties are entitled to nominate members of their party as candidates or non-affiliated. In other words, any citizen, including a non-affiliated citizen, can also become a candidate for deputy and its right to seek political or public office in its individual capacity is fully ensured.

– The mass media provide coverage over the course of campaigning and elections;

– Decisions of election commissions are published in the media or published in accordance with the established procedure;

Sixth, the necessary conditions have been created for the exercise of the voting rights of citizens of the country regardless of where they are in the world.

Seventh, the Code provides for standards that make it possible to exercise the constitutional right of citizens to judicial protection of their rights and freedoms and to appeal to the courts against unlawful acts of state bodies, officials and voluntary associations.

Thus, a candidate or an observer has the right to file a complaint regarding any aspect of the electoral process (including requesting a recount or invalidating the election results).

Article 102 of the Electoral Code is devoted to this issue. It stipulates that decisions of election commissions can be appealed by the bodies of political parties that nominated candidates for deputies, candidates for deputies, proxies, observers and voters to the higher election commission or to the court within ten days after the adoption of the decision.

Central Election Commission decisions can be appealed to the Supreme Court within ten days of the decision being made. The complaint must be considered within three days after its receipt, and if there are less than six days until election day, immediately. Those who filed a complaint have the right to participate directly in its consideration.

In conclusion, it should be noted that the adoption of and the implementation of the Strategy for Action in the country marked the beginning of a qualitatively new stage in the development of our statehood.

All the democratic reforms being implemented, be it in the sphere of public administration, economy, social and humanitarian sphere, as well as the judicial and legal field, all of them are aimed, first and foremost, at the protection of human rights, freedoms and the legitimate interests of our ordinary citizens.

Given the profound changes that are sweeping our society and people’s minds over the past three years, we can confidently say that the 2019 elections will be held in a completely new political environment, with intense cross-party competition, ideas and programs. And the Electoral Code adopted by the Parliament will become a reliable basis for holding genuine democratic elections.