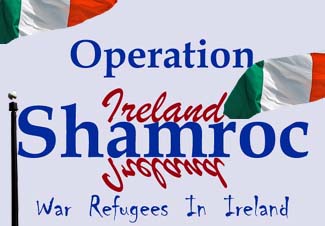 The project was started by the Save the German Children Society (SGCS) founded in 1945 at a meeting in the Shelbourne Hall, Dublin, to find foster homes in Ireland. Its President was Kathleen Farrell, née Murphy, a paediatrician. The SGCS proposed to house Catholic and Protestant children with families of the same denomination, and not to take Jewish children who it feared would not integrate … The Society secured hundreds of volunteer families, around 90 per cent Catholic.  It had contact with religious charities in the ‘British Zone’ and approached the Irish Government about transporting children from there via Great Britain.

The Centenary of the Great Irish Famine was a motivator for the Fianna Fail government to assist Europe in general in the post-war hardship but it agreed with the UK Government that the SGCS was an unsuitable organisation and refused to permit immigration under its auspices. The Society then applied to the Allied Control Council and the United Nations Relief and Rehabilitation Administration. It was advised to use the Irish Red Cross to arrange for the migration. By 14 February 1946 it had received 100 French children as refugees and Government efforts were ongoing to secure Polish refugee children.

In spring 1946, the British authorities agreed to allow children to leave Germany. The Irish Government agreed to host some for three years after which they would be sent back to relatives in Germany.  By May the German Catholic charity CARITAS had selected 100 children between ages of five and fourteen, predominantly in the Ruhr area of North Rhine Westphalia who were put in the care of the Irish Red Cross.

The initial reception centre was St. Kevin’s Hostel, County Wicklow, a former reformatory school owned by the Minister for Supplies. There, the Daughters of Charity of St. Vincent de Paul nuns provided treatment for transmissible diseases and malnutrition. The Red Cross then liaised with the SGCS to place the children in homes with most adapting quickly, learning English and sometimes forgetting German.

Between l January 1946 and 25 June 1947, 1,000 aliens were registered under the Aliens Act 1935 as having immigrated to Ireland, of whom 462 were children, 421 were German, all but eighteen of whom came via the Red Cross. In 1949 when the time came to return to Germany many of the children did not wish to do so. Where host and German families were both willing the SGCS applied to the Government to allow the children to stay in Ireland. Against the wishes of the Red Cross about fifty did so.

In 1956 a memorial fountain, ‘Three Faities’, sculpted by Joseph Wackerlie and commissioned by the German Gratitude Fund was unveiled in St. Stephen’s Green, Dublin by the West German Ambassador.  In 1961 the German war cemetery was opened near St. Kevin’s hostel, Glencree, for graves of German aviators killed in Ireland during the war. In 1974 the Glencree hostel became the Glencree Centre for Peace and Reconciliation which played a role in the Northern Ireland Peace Process in the 1990s.

In March 1977 a reunion of over 300 foster children and families was held at the German Embassy in Dublin, attended by Mary Robinson of Ireland and Roman Herzog of Germany. German language courses provided for refugees in Dublin led to the foundation of the St. Killian’s German School. As part of the national celebration ‘Gathering Ireland 2013’ twenty-one refugee children from Germany, France, Austria returned to Glencree.

Sources and citations include the national RTE programme about Operation Shamrock.

The history of Ireland’s acceptance of refugees during WW2 is controversial and also greatly misunderstood. Dublin’s small Irish-Jewish Museum near the South Circular Road provides a host of information with a large range of exhibits giving a keen insight into the life of Irish Jews. The area was once the home of a sizeable Jewish population and the old Walworth Road Synagogue that served their religious needs has been preserved within the upper floor level of the Museum.

‘An Irish Sanctuary: German-speaking German Refugees in Ireland (1933-1945)’ is a recent academic monograph publication about the first group of German speaking exiles who came to the young Irish Free State from 1933 onwards. They had considerable impact on academic, industrial and religious developments in Ireland. The academic study by authors Gisela Holfter (University of Limerick) and Horst Dickel, Wiesbaden, answers the question to what extent Ireland proved to be a sanctuary for them and what impact they had on Ireland. It closes the gap in the research of countries that received refugees from the Third Reich and breaks new ground on mapping the histories of the refugees, beginning with their origins in Germany, England, Austria and the US as well as unprecedented access to closed files and numerous interviews that have made it possible to give an almost complete overview.

The Vienna School of International Studies Favorita Papers of the Diplomatic Academy of Vienna, Special Edition Austro-Irish Links Through Centuries, is a vast study of the different periods of Austro-Irish relations that have progressed and continue to thrive until the present time.  It includes material on Austrian exiles in Ireland.