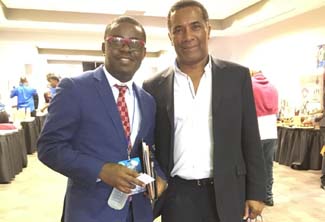 Garaudy Laguerre’s Opening Remarks at NAAHP Conference on the Diaspora

1 – I would say the Diaspora is definitely a POTENTIALLY POWERFUL contributing engine, for HAITI.

Yes, however, within a NATIONAL VISION and PLAN, for the economic, social and cultural development of the country and its people.

A– To implement such a VISION and PLAN, the role of the State, in my opinion, is paramount, in PRIORITIZING HAITIAN NATIONAL INTERESTS and the well-being of the POPULATION.

For, our Diaspora, the way it is treated, it’s safety and success is measured in part by, and is a reflexion of, the way we project ourselves on the world stage, our reality and that of the countries welcoming us.

Those priorities of national interest should be :

See, I believe, you can never beat the enemy, while raising its flag!

B– Only through such a vision and plan could we achieve :

2 – Now, to realize this, the diaspora, particularly in the U.S., could play an important political, social and economic role.

This is not true for Haiti, nor is it true for any other country. 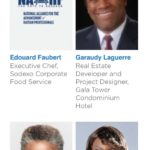 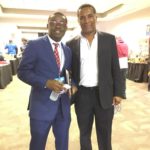 Garaudy Laguerre with Eder Francois from the 2019 NAAPH Conference 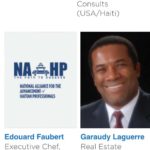 A– While there are a lot of good people in the diaspora, and we all love and want to see a better Haiti, we also need to recognize that the diaspora is diverse, people with different aspirations, demands and needs, depending on location, economic reality and social status. (Dominican Republic, Bahamas, France, Canada U.S.A.) etc.

I am not saying that it is better to have mediocre and irresponsible leaders inside the country, ruining the country !

We need to build a country, with good government, vision and leadership.

Until we do that, in a country where minimum wage is 500.00 Gdes a day, the employment rate over 50%, while the World Bank fixed extreme poverty levels at $1,90 a day, as business people and entrepreneurs, we can all take our chances individually, we could fail or succeed. But we do so, at our own risks! And it will be exactly that: taking chances, chances that are far from and beyond the inherent risks of investing.

There lies our fight, there also, lies our freedom !- The challenge we face today, my friends, is to come together, as a force, to establish yourselves here first and foremost and help build, in Haiti, the Haitian state and government that we need and deserve, for the well-being of all Haitians, particularly those living in Haiti !