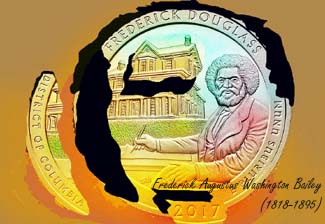 From Slavery to Freedom: Frederick Douglass in Ireland

He was born into slavery as Frederick Augustus Washington Bailey (1818-1895) in Cordova, Maryland, USA.  After escaping from slavery in Maryland he became a national leader of the abolitionist movement in Massachusetts and New York, gaining note for his oratory and his incisive antislavery writings. Described as tall and handsome in his late twenties, just how late he didn’t know. Slavery had robbed him of knowledge about the exact circumstances of his birth, its precise date as well as uncertainty of his father’s identity. He was separated early from his mother who had been a slave in the ownership of a wealthy white Master whose paternity he suspected. He grew up in the cruel and inhuman conditions of bondage. With his escape in 1838 his dangerous and daring journey to the northern states of the USA is well documented and widely chronicled.

He wrote later of his arrival in New York City: I have often been asked, how I felt when first I found myself on free soil. And my readers may share the same curiosity. There is scarcely anything in my experience about which I could not give a more satisfactory answer. A new world had opened upon me.  If life is more than breath, and the ‘quick round of blood’, I lived more in one day than in a year of my slave life. It was a time of joyous excitement which words can but tamely describe. In a letter soon after reaching New York, I said: ‘I felt as one might feel upon escape from a den of hungry lions’. Anguish and grief, like darkness and rain, may be depicted; but gladness and joy, like the rainbow, defy the skill of pen or pencil.

To avoid being recaptured after his incendiary attack on slavery he was advised to leave America.  Along with a Quaker friend he sailed to Liverpool, England on The Cambria, a trans-Atlantic paddle-steamer, which brought the nineteenth century civil rights activist and escaped slave to Ireland. He travelled in Ireland as the Great Famine was beginning to take a grip on the country. The feeling of freedom from American racial discrimination amazed Douglass; “Eleven days and a half gone and I have crossed three thousand miles of the perilous deep. Instead of a democratic government I am under a monarchical government. Instead of the bright, blue sky of America, I am covered with the soft, grey fog of the Emerald Isle. I breath, and lo! The chattel becomes a man. I gaze around in vain for one who will question my equal humanity, claim me as his slave, or offer me an insult.” His first autobiography had just become a best seller in America. Abraham Lincoln would call him the “the most impressive man I ever met.”

Odyssey in Ireland: ‘The Black O’Connell’

Douglass’s visits consisted of multiple lectures in Dublin, Cork, Limerick and Belfast. He also made brief stops in Wexford and Waterford. He was a fervent admirer of Daniel O’Connell (1755-1847), Irish political leader and ‘liberator’ who was famous for his refusal to take the anti-catholic declaration at the Bar of the British House of Commons with the following words … I at once reject this declaration: Part of it I believe to be untrue, and the rest I know to be false”. O’Connell was present when Douglass arrived in Cork to a rapturous welcome as part of a two years lecture tour in England and Ireland to champion freedom from slavery and to promote his book ‘Narrative of the Life of Frederick Douglass, An American Slave’. In England and Ireland, Douglass was mainly hosted by the active abolitionist Quaker community. In 1846 it was a group of Quakers who raised funds to legally purchase his freedom from bondage for the sum of £150 to release him from slavery.

He described his time in Ireland as ‘transformative’ and as ‘the happiest days of my life.’ He filled halls with his eloquent denunciations of slavery and causing controversy with graphic description of slaves being tortured. He also shared the stage with Daniel O’Connell and took the pledge from the Irish ‘Apostle of Temperance’, Father Mathew. It was speaking in front of O’Connell that Douglass made his impassioned plea for his enslaved people to find their own ‘Black O’Connell’. Throughout his life Douglass would playfully refer to himself this way. In 2011 in Dublin on his visit to Ireland, President Obama declared ‘we found common cause with your struggle against oppression. Frederick Douglass, an escaped slave and our great abolitionist, forged an unlikely friendship right here in Dublin with your great liberator, Daniel O’Connell.’

While delighted with the openness with which he was received, he was shocked at the poverty he encountered. Moreover, during his sojourn in Ireland, Douglass had honed habits of independence, discretion, compromise, self-reliance and practical politics that served him over the coming decades. Those habits eventually empowered him to play his career’s most defining role on the stage of world history in providing counsel for and assisting the sixteenth American President Lincoln’s elevation of the US military’s actions during the American civil war from a campaign to preserve the Union to a moral cause devoted to vanquishing American slavery.

Frederick Douglass died in Washington, D.C. from a sudden heart attack on 20 February 1895. He was buried in the Douglass family plot in Mount Hope Cemetery, New York. His legacy for the abolition of slavery is remembered far and wide.

Note:  Acknowledgement is given to the sources used in preparation of this text.  It succeeds a lecture that I attended in Kingston upon Hull, UK City of Culture 2017, at the Hull University Wilberforce Institute about the life and work of Frederick Douglass. A Member of Parliament between 1780-1825, William Wilberforce was an English politician and active social reformer who is remembered as a favourite son of Hull for his role in leading the long parliamentary campaign to abolish the slave trade. These human rights were codified in the United Nations Universal Declaration of Human Rights (1948).