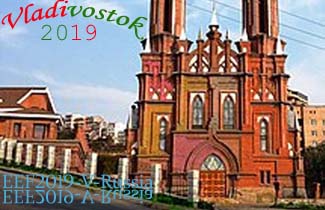 What about attending the Eastern Economic Forum in Vladivostok, Russia this year?

Vladivostok has always had enormous political and economic importance for Russia. It is the terminal stop of the famous Trans-Siberian Railway, Russia’s largest seaport and the base of its Pacific Fleet. The Trans-Siberian Railway is a railways system whose original, main line connects Moscow with the Russian Far East. The longest railway line in the world with a length of 9,289 kilometers, it has connected Moscow with Vladivostok since 1916, and is still being expanded and improved.

A special landscape and location between the Amur and Ussuri bays on the Golden Horn Bay prompted the famous Norwegian traveler Fridtjof Nansen to compare the city with Naples.

“The view of the city from the sea is very beautiful, Vladivostok is unlikely to give way to any city in this respect. Located on terraces, it is very reminiscent of Naples. True, there is no Vesuvius in the background, but a beautiful harbor and beautiful islands,” he later wrote.

In 2012, in anticipation of the APEC summit conference, Vladivostok underwent a major overhaul with many new monuments and attractions built for the event.

Since 2015, in accordance with a decree of the President of the Russian Federation Vladimir Putin, the Eastern Economic Forum (EEF) – Восточный экономический форум (ВЭФ) – has been held there annually in September. This year will see the fifth Forum, from 4 to 6 September.

Although initially set up to encourage investment in Russia’s Far East, the Forum has seen its scope expand steadily as it has become a major platform for the discussion of key issues in the world economy, regional integration, and the development of new industrial and technological sectors, as well as of the global challenges facing Russia and other nations in the region.

As the number of foreign delegations attending increases, along with events and meetings, and agreements signed on the margins of the Forum, the gathering grows in importance, with the result that has already become one of the world’s major gatherings.

Events at the Forum customarily take place in the form of panel sessions, round tables, televised debates, business breakfasts, and business dialogues devoted to Russia’s relationships with its neighboring countries.

The Forum business programme includes a number of business dialogues with leading partner countries in the Asia-Pacific region, and with ASEAN, a key integration organization of dynamically developing nations in Southeast Asia.

Last year it was attended by more than 340 heads of foreign companies, plus heads of 383 Russian companies.

Over the years, the Forum has become a recognized international platform for discussing multilateral cooperation in the Asia-Pacific region. EEF-2018 had a record-breaking total of signed agreements, which underlines its high practical effectiveness. At last year’s fourth Eastern Economic Forum, 220 agreements were concluded for a total amount of 3.1 trillion rubles.

For those intending to attend who can manage the time, the ideal is to use the occasion to cross Russia, starting at Saint Petersburg, taking the high-speed rail connection to Moscow, then the Trans-Siberian, pausing along the way at some of the most famous stops. The trip takes the traveler across eleven time zones and some of the most spectacular scenery on earth. For the business traveler, it is the ultimate business trip!