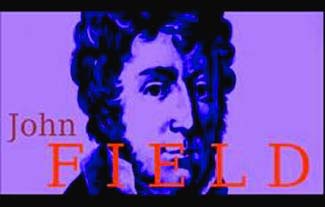 Born in Dublin into an established musical family John Field was taught by his father (a violinist in Dublin theatres), his grandfather and the composer Tommaso Giordani. As something of a prodigy he made his debut in Dublin at the age of nine and his first London appearance in 1793. He worked as a piano salesman and demonstrator for Muzio Clementi in London, who took him on a European tour in 1802, visiting Paris, Vienna, and St Petersburg.

From 1803 he settled in Russia where he lived for most of his life. For much of the time he lived in the households of his patrons, first in St Petersburg and later in Moscow, while continuing his concert appearances throughout Europe. Shortly after his death his works faded into obscurity; today however his legacy as a seminal figure in Romantic piano composition is secure. There is a commemorative plaque to him in his native Dublin.

He initiated an important school of Romantic pianism, exemplified in the famous ‘nocturnes’ for solo piano which found their ultimate expression in the music of Chopin. His works include seven piano concertos (1799-1832) and a piano quintet (c. 1815). The Irish pianists Veronica McSwiney, John O’Conor and Micheal O’Rourke have recorded his work extensively. His substantial body of work is the subject of much bibliography, musical historiography, piano literature, academic study and scholarly debate.

Known as the greatest Irish figure of the Romantic era, he developed a highly influential keyboard style that provided a direct path to the music of Chopin.  Field’s playing was marked by a particular sweetness and delicacy with an emphasis on colour and tasteful expressivity described as song without words, qualities reflected in his best known and most influential compositions, primarily his nocturnes.

The development of the keyboard character piece paved the way for generations of Romantic composers including Mendelssohn, Schumann and Chopin, all of whom were indebted to John Field. His many dances, rondos and various other short works became custom for the composer to use on specific occasions. His seven piano concerti, however, are wholly representative of the typical work of the period with which he makes effective, idiomatic use of the instrument.

Very few composers are credited with having ‘invented a form’ but one view most people express about John Field is that he invented the ’nocturne’.  While others before him, Haydn for one, had used the term ‘nocturne’ or ‘notturno’, either for a short, lyrical piece or kind of serenade, it was Field who cultivated it both as an idea and a genre, and associated it inescapably with the piano. Perhaps more important is the fact that he was the first Celtic voice – certainly the first Irish composer to contribute to European concert music. Though not massive in itself, his contribution had huge consequences.

In 1808 he married Adelaide Percheron, a French pupil of his in Moscow. He became both wealthy and famous. He also gained a reputation for riotous living. In 1815 he fathered an illegitimate child, a piano prodigy, who became an opera singer. During the 1820s, after his wife had left him to set up as a piano teacher on her own, taking their legitimate son Adrien with her, Field virtually ceased composing, sank into alcoholism, and became known among his former Moscow friends as ‘Drunken John’.

His health declined and in 1831 he fell ill and was diagnosed with cancer of the rectum. In search of treatment he left Russia and returned to London where he underwent a partly successful operation. He was reunited with his mother before her death, and was able to attend the funeral of his old master Clementi. He then embarked on a tour of various European cities. In Italy in 1834 he fell ill again and was hospitalised for several months in Naples, where he was discovered by a Russian noble family, the Rakhmanovs. They managed to bring him back to Moscow, by way of Vienna, where he gave some concerts.  Back in Moscow, in September 1835, he composed his last ‘nocturnes’ before his death in 1837 aged 54.

Though he left Ireland very young it is said he never lost his Irish humour. The story goes that on his deathbed his friends brought him a priest who asked what was his true religion, for his parents had been ‘nominally’ Protestant, yet Field had been married in a Catholic ceremony. Was he a Catholic?  A Protestant?  Perhaps a Calvinist?  … ‘Je suis claveciste’ – I am a pianist – he said – with his Irish wit still intact!

Note : Acknowledgement is given to encyclopaedic and all other sources used in preparation of this text.