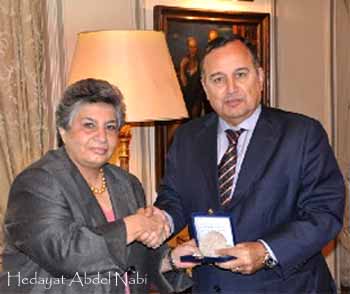 Diva International For more than a decade, you were the Kuwait News agency’s representative in Geneva covering international affairs. Now you have returned to your native Egypt where you have a very different view of the world. How does the world look to you today after this change of observation point ?

Hedayat Abdel Nabi I lived in Geneva from January 1997 until my departure for Egypt in September 2011, after the beginning of the Arab spring. Yes, the move to Egypt has afforded me a somewhat different perspective. The situation is still very bad in Syria and Libya while improving in Iraq, which was not involved in the Arab Spring but was devastated from the 2003 invasion. Egypt is recovering from very turbulent times following the 2011 January revolution, and moving towards stability. In Asia, the Americas and Europe, so far, the pace of development is on a high scale.

D.I. You were one of the founders of the Press Emblem Campaign for the protection of journalists in conflict areas. How did this project come about?

H.A.N. When I came to Geneva in January 1997, I was dazzled by the peace, tranquility and human rights that prevailed in the city. I worked with the UNHCR for two years. Then I moved back to my profession of journalist, working for the Kuwait News Agency, covering the United Nations and other organizations in Geneva, among them the ICRC. I was impressed by the ICRC’s idea of a protective emblem. During the years from 1999 to 2003, leading to the invasion of Iraq, I followed the situation of journalists worldwide. Then came the huge media casualties during the conflict generated by the invasion of Iraq. I told myself, “As we are living in peace in Geneva, we must find a way to protect our colleagues falling one after the other, especially in Iraq.” Then came the idea of a media protection emblem, which ended up being called the Press Emblem Campaign (PEC). The name was reached through discussions with my colleague Blaise Lempen, who has been the PEC Secretary-General since June 2004, the year the PEC, was established in Geneva as an NGO.

D.I. How would you characterize the situation for journalists today, particularly in Yemen?

H.A.N. The situation remains unchanged in war zones and conflict areas. We still have not reached a convention to protect journalists in the very dangerous areas, in spite of the call the PEC has been raising for the past 14 years.

Yemen is a war zone; hence, the difficulties and dangers for journalists are compounded.

D.I. In French, they say that journalists are the Fourth Estate. Do you agree?

H.A.N. Yes, I am still working as a journalist, producing my own magazine called People’s Rights on a website www.poplesrights.net, inspired by the 2011 revolution. I started the magazine in 2015. Prior to that, I also produced a magazine MABad, mouthpiece of the Association of former United Nations employees (AFICS-Egypt). I am very proud of both. Therefore, as I mentioned, a journalist in good health can work well beyond the age of 60.

D.I. And the very last question: if you have a message for our readers, what would that be?

H.A.N. My message is that human rights are at the core of all rights. If respected, they are the path to development and prosperity of any nation, and at the very base of those rights are journalists: the eyes, ears and conscience of all humanity. Journalists are the true and real defenders of those rights. They are the agents for reporting human rights abuses around the globe as well as for promoting and implementing impunity and bringing the perpetrators of those abuses to justice, and they deserve our total respect.