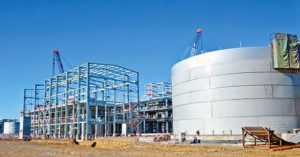 GAS CHEMICAL COMPLEX WAS PUT INTO OPERATION IN TURKMENISTAN

President Gurbanguly Berdimuhamedov attended the opening ceremony of the Kiyanly Gas Chemical Complex for production of polyethylene and polypropylene to press the button that launched the production process and examine technological processes.

This major investment project worth over 3.4 billion US dollars was implemented by Turkmengas State Concern together with foreign partners, Korea’s LG International Corp and Hyundai Engineering, and Japan’s TOYO Engineering Corporation. The trilateral contract was signed during the official visit by President Gurbanguly Berdimuhamedov to Japan in 2013.

The production capacity of the new complex was designed to process 5 billion cubic meters of natural gas per year, thus allowing for the production of 381 thousand tons of high-density polyethylene, 81 thousand tons of polypropylene and other valuable products, as well as for the obtaining of up to 4.5 billion cubic meters of marketable gas that will be distributed to gas pipeline systems and used as a fuel.

The plant is equipped with a modern equipment purchased in Japan, the Republic of Korea, the USA, the UK, Belgium, Germany, Denmark and other European countries. It has four main technological facilities: for gas separation, for ethane processing and for polyethylene and polypropylene production. All technological processes are automated and function under centralized control.

The advanced engineering solutions were used at installation of auxiliary systems for extraction and demineralization of seawater, for recovery, treatment and reuse of industrial waters, for steam, air and nitrogen production, for fire safety etc. The gas-turbine generator provides the uninterrupted supply of energy to the complex. Warehouses were built to store chemical reagents and finished polymer products.

The polymers are produced at the Kiyanly Gas Chemical Complex with the cutting-edge technology which is distinctive in that it uses unique schemes for deep cleaning of the original raw materials from all kinds of impurities. More precisely, the gas separation facility uses the COREFLUX™ technology for effective extraction of methane and ethane from natural gas, and the technology that is widely used throughout the world to purify raw materials from the so-called acid gases and mercury. The ethane facility allows for the processing of 685 thousand tons of hydrocarbons per year.

The plant will launch the production of high-density polyethylene, a new product for Turkmenistan. It will be obtained through low-pressure polymerization of ethylene with the Innovene™S technology, one of the top three most widespread solutions in global oil and gas chemical industry. The license is granted by INEOS Technologies (UK), one of the largest international corporations that comprises chemical enterprises purchased from such giants as BP, ICI and BASF. This is the first Innovene™S license from INEOS Technologies in Central Asia.

The project for the construction of the Kiyanly Gas Chemical Complex received the TXF Award (UK) as one of the best ECA-backed projects in Europe and Eurasia in 2014.

The total value of loan agreements signed by the State Bank for Foreign Economic Affairs of Turkmenistan with the Japan Bank for International Cooperation, the Export-Import Bank of Korea and the syndicate of participating financial institutions of Japan, Germany, France, Korea, China, Italy, Austria and Switzerland to finance the project exceeds 2.5 billion US dollars.