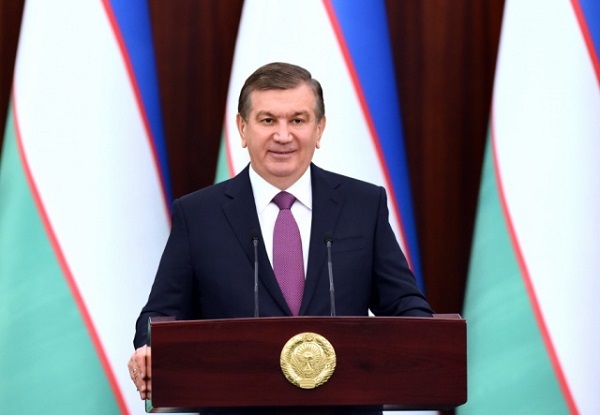 President of Uzbekistan Shavkat Mirziyoyev met with a group of employees of prosecution bodies on 7 January to congratulate them with their professional holiday. A law was signed on 19 December 2016 establishing 8 January as the Day of workers of prosecution bodies of Uzbekistan.
He congratulated workers of the prosecutors’ bodies of Uzbekistan with their holiday and wished strong health, peace, success in their work.
Shavkat Mirziyoyev said that prosecution authorities should play an important role in further strengthening of justice in society. People can endure any hardship, but cannot tolerate injustice, he added.
President stressed that workers of prosecution bodies have responsible task, which require dedication and objectivity.
He said that human fate is behind of each decision. Adoption of well-considered and balanced decisions should be the main criteria for the activities of prosecutors.
Mr. Mirziyoyev noted that prosecution bodies play an important role in strengthening legislation and their execution, improving legal awareness of population, forming democratic legal state, supporting development of private property and entrepreneurship, their interests.
During the meeting, it was underlined that presidential decree “On additional measures on ensuring rapid development of entrepreneurship activities, all-round protection of private property and the qualitative improvement of the business climate”, adopted on 5 October 2016, increased responsibility of the officials for illegal intervention and obstruction to activities of the businesses, as well as unjustified suspension of their activities. This puts additional responsibilities to the prosecutors over supervision of correct and full execution of the legislative acts and prevention of violations.
Mirziyoyev said that prosecution bodies should play an important role in further developing entrepreneurship activities.
It was underlined that if the entrepreneur is rich, the state will be rich as well. All conditions should be created for businesspeople. Prosecutors should help and support businesses.
2017 was announced as the Year of dialogue with population and human interests and prosecutors should solve important tasks. Mirziyoyev said that no appeals of the population and businesses should be ignored.