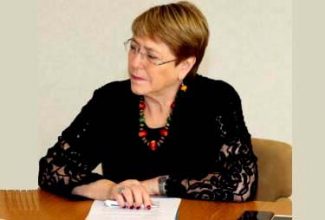 The publication by the United Nations High Commissioner for Human Rights, Michelle Bachelet, of a report on China

The publication by the United Nations High Commissioner for Human Rights, Michelle Bachelet, of a report on China just minutes before the end of her term in office has – predictably – caused discontent in both China and among human rights activists.

The major point of contention is what the latter claim are concentration camps where some one million Uyghors are interned, tortured and killed in a genocidal project.

Both critics seem to be missing the point, which is the United States intelligence services’ involvement in Xin Jiang. Tens of thousands of Uyghurs have been exfiltrated through the Wakhan Corridor – the long valley constituting Afghanistan’s east end that abuts Xin Jiang. Muslims, they have been sent to Afghanistan’s madrassas, set up under the auspices of the CIA and run and financed by Saudi Arabia. The purpose is the creation radical Islamic “shock troops”.

Lawrence Wilkerson, a major United States geostrategy analyst and General Colin Powell’s former chief of staff has reckoned their numbers in Syria to be some 10,000.

In the case of China, they are infiltrated back in to carry out terrorist attacks and generally destabilize China with a view to its dismemberment.

Those inclined to dismiss this might consult the United States diplomatic cables from its embassy in Damascus, published by Wikileaks, drafted by one William Roebuck, who was planning the cultivation – and high-jacking – of popular discontent with a view to launching a civil war resulting in… Syria’s dismemberment.

The dismemberment of Yugoslavia, we now know, was carried out similarly. There are numerous other such examples.

The major player in what has come to be called “regime change” is the National Endowment for Democracy (NED), set up and funded by the United States Congress under Ronald Reagan. In a 1991 interview, the NED’s president Allen Weinstein stated, « A lot of what we do today was done covertly 25 years ago by the CIA. » Nothing has changed since then – on the contrary, and the NED, originally under the CIA, is now under the National Security Agency.

Notwithstanding its government funding, its website describes it as “a private, non-profit foundation”, each year giving some 2,000 grants “to support the projects of non-governmental organizations abroad who are working for democratic goals in more than 100 countries”. Among many other scholars, William I. Robinson of the University of California at Santa Barbara has tracked the NED’s activities, in particular in his area of specialization, Latin America, and has been unrelenting in denouncing its abuses.

In the case of China, the spearhead is the NED-backed World Uyghur Congress. Nonetheless, an organization backed by the leading security agency of a country boasting the ability of its satellites to read the print on a cigarette pack has yet to produce any satellite photographs credibly ascertaining the existence of the vast concentration camp network.

That there might be re-education centers to make the captured radicalized Uyghurs eligible for what the Swiss call reinsertion into society never seems to occur to anybody. Nor does anybody mention what governments critical of China – especially the United States – do to persons merely suspected of engaging in what the these governments vaguely refers to as “subversive activities”.

The – rightly – famous Australian documentary film maker John Pilger, in a 2015 documentary, The Coming War with China, explores in detail the plans by the United States to do to China what it has done to Yugoslavia, Libya, Somalia, Sudan, Iraq, Syria, Afghanistan, Congo Kinshasa and so many other countries. Pilger points out that the United States has set up around China a ring of some 400 military bases, heavily armed, including with nuclear weapons. China, despite its huge wealth, has no overseas military bases.

Given that United States officials’ repeated, public, statements claim China represents the greatest threat to world peace and security and that Cato the Elder’s slightly modified exhortation (CHINA DELENDA EST –  China must be destroyed) seems to have become the guiding light of its China policy, perhaps China is justified in being apprehensive of these tens of thousands of radicalized Uyghors infiltrated into its national territory.