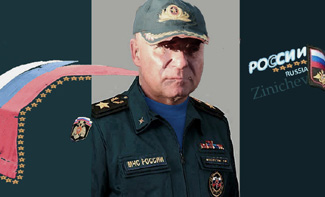 It is with a heavy heart, and our eyes filled with tears that we share with you this sad news about the loss of Evgeny Zinichev, Minister of Emergency Situations in Russia, in a tragic accident in Putorano Plateau in the Krasnoyarsk territory during the international civil defense exercise taking place earlier today.

The accident happened during the filming of the exercise, when all of the sudden the cameraman slipped and Minister Zinichev rushed to help him. He was the only one stretching out his hand, but it was all in vain. The two of them fell into the abyss.

It is indeed a tremendous tragedy for Russia to lose this outstanding professional who understood the value of protecting people from disasters and pain. In less than a year, Zinichev had managed to reform the ministry and to give the civil defense profession real status and prestige — not to mention that owing to his actions and reforms, the civil defense personnel received good salaries. These have always been the unsung heroes, and the Minister knew to value their efforts. They lost a protector and a man who knew how to protect his subordinates and his peers.

The world’s international civil defense movements share our mourning tonight. From all over the world, civil defense colleagues are sending their condolences to Russia and to the friends and family of this extraordinary humanitarian and civil defense stalwart.

Zinichev was a strong supporter of international collaboration and information sharing, promoting best practices and stretching his hand out whether those in need were in Africa, Latin America, the Arab world or elsewhere. He was also an important figure in the International Civil Defense Organisation (ICDO). He supported it in its work and played a major role in restructuring the organization.

The President of the General Assembly of the International Civil Defense Organisation (ICDO), Mr Lazare Yago, of Burkina Faso was the first one to react. He wrote : Quelle triste nouvelle, toutes mes condoléances à la Russie, et a la famille de la protection civile en particulier, qu’il repose en paix, union de prière et de solidarité de corps. (What sad news, all my condolences to Russia, and the family of civil protection in particular, may he rest in peace, union of prayer and solidarity of body..).

He will be missed by his friends and peers around the world. In Africa people pray that God will receive him in paradise, and we join them in their prayers for the loss of a true humanitarian and a dedicated man.