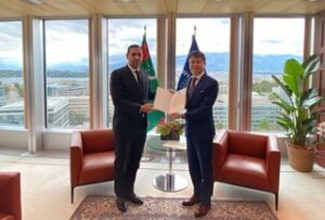 On the 15th of October, 2020, the ceremony of presenting the Instrument on Turkmenistan’s joining the “Marrakesh Treaty to Facilitate Access to Published Works for Persons Who Are Blind, Visually Impaired or Otherwise Print Disabled” of 2013, signed by the President of Turkmenistan, to the WIPO’s Director General Daren Tang was held in the World Intellectual Property Organization headquarters in Geneva.

In the framework of the ceremony, the Ambassador – Permanent Representative of Turkmenistan at the UN Office in Geneva has congratulated Mr. Daren Tang with the recent appointment as the WIPO’s Director General (1st of October 2020) and noted the commitment of Turkmenistan to the constructive dialogue with the respected international organizations, in particular the WIPO.

The ratification by the Parliament of Turkmenistan of the “Marrakesh Treaty” on August 22, 2020 serves as a vivid result of our country’s cooperation with the international partners.

The Permanent Representative also noted that the Parliament of Turkmenistan has ratified the “Rome Convention for the Protection of Performers, Producers of Phonograms and Broadcasting Organizations” and the President of Turkmenistan has signed the corresponding Instrument on joining which will be presented to the UN Secretary-General in the coming future.

Director General Daren Tang underlined the intensification of cooperation between Turkmenistan and the WIPO in recent years and specifically noted the importance of Turkmenistan’s joining the “Marrakesh Treaty” in these difficult times for the whole world.

Expressing gratitude to the Turkmen side for joining the international legal documents of the WIPO, Director General welcomed the joint work of the Government of Turkmenistan with the Organization on the development of the new “Programme on the Improvement of the Intellectual Property System in Turkmenistan for 2021-2025” and underlined the growing dynamics of cooperation with the WIPO aimed at the enhancement of the system of intellectual property in Turkmenistan.