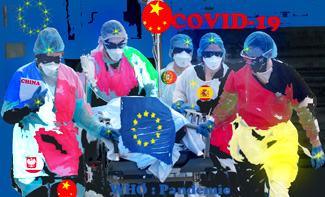 EUROPE before and after the Coronavirus 19 By MRI, Political Analyst

The health and lives of citizens must be a priority again.

Citizens are tired and upset by the chaotic way of managing crisis.

Lack of a common European strategy is evident.

Apologies and solidarity are not enough.

A concerted response and a common European strategy is needed.

2.  The CORONAVIRUS came to Europe !

3. How will Europe be after the Coravirus ?