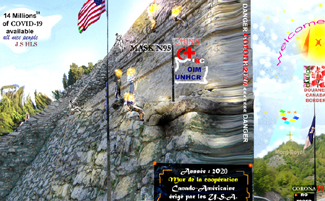 Within this context it relates to my experience of being forced to remain physically separated from family and friends, strangers too, in face of the current worldwide peril of the Coronavirus. When it was threatening to become a menace to public safety and health it was ignored or denied. The virus without borders quickly spread far and wide with devastating effects that are now controlling our lives.

The consequent development was the need for different governments to react by declaring drastic emergency safety and health measures. They include strict rules of confinement for personal and national protection while curtailing all freedom of movement within and across national borders.

Demands and strains on existing public health and social services are being stretched beyond capacity with front-line and related staff risking their own health and even lives. Scientists and medical specialists are under severe pressure to discover and create impediments to the virus while the world has shutdown at an alarming rate without control or any hope of an imminent return to normality.

The emergency has brought to the fore the tremendous resilience of generations of ordinary citizens from all walks of life to volunteer their support and help to those who are in need. Among the latter are many thousands who find themselves amongst the most vulnerable individuals or groups. Throughout history, human beings have built fortifications to protect themselves from threat. Beyond the threats to which they bear witness, walls symbolise the duration of conflicts. They separate countries and people. The walls entrenching our planet today are higher and more present than ever before. Geographical mobility redefines new territories but far from suppressing political barriers, it creates new ones that are harder to define. Surveillance cameras and radar make surveillance and repression invisible. Perceived as an unsurmountable obstacle over time ways around it are devised.

The temptation of a wall is nothing new. In the short term, it fulfils the functions of protection and safeguarding.  But alone it cannot guarantee effective protection. Beyond security and protection, the objective is separation from one’s neighbours.

A lesson from the rapid spread of the Coronavirus creates an urgent need for scientific and medical protection against an invisible enemy that escapes the world’s invisible walls and barriers.