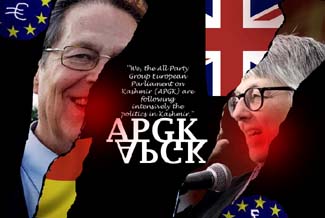 We, the All Party Group European Parliament on Kashmir (APGK) are following intensively the politics in Kashmir. We are convinced that the right for selfdetermination should no longer be refused for this Himalayas territory disputed between the two nuclear powers India and Pakistan.

We have raised our voices – and will continue to do so – for a peaceful solution. The European Parliament has therefore adopted resolutions and reports, urging a respect of human rights, rule of law and confidence building measures. We have as well hosted conferences, where all parties involved in the conflict have participated. As India is heading this month towards general elections, we see signs, which are very disturbing – apparently to attract Hindutva voters :

1. UN resolutions and the European Parliament confirm the Kashmiri right for selfdetermination. Narendra Modi, the Prime Minister of India, has raised the stakes by projecting this right to self-determination as “sponsored terrorism.”

2. On this pretext, the Indian armed forces use excessive force that lead to unlawful killings and a high number of injuries, many caused by pellet-firing shotguns.

3. Sections of the leadership of the All Parties Hurriyat Conference (APHC), a joint political forum which is a stabilising factor in this conflict, have been arrested including Yasin Malik, chairman of the JKLF. The Jammu & Kashmir Public Safety Act will enable a detention of up to two years without any access to a judicial process.

4. The National investigation Agency of India (NIA) has pinpointed the APHC leaders for alleged “terror funding” simply because they advocate the right to selfdetermination for the people of Jammu & Kashmir across the Cease Fire Line (CFL).

5. The NIA raided the residence of Mirwaiz Umar Farooq (APHC), and is asking him to present himself at the NIA office at New Delhi.

We urge the Government of India not to pour more oil in the fire – and to abstain from any (purely electoral) accusations, harassment and detention of the moderate opposition in Kashmir.