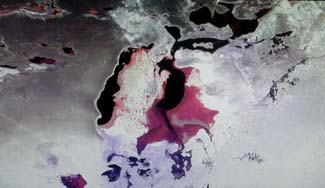 The water issues are the most important in Central Asia. In some cases, they are the determining factor in the development of the regional processes. The development of the states in our region, their economy, social sector, the level of well-being and quality of life of the people are directly dependent on the access to water resources and their effective management.

The related issues should be resolved, firstly, based on the generally accepted norms of the international law, secondly, taking into account the interests of each of the Central Asian state, and thirdly, with the active participation of the international organizations. — This is our principled position and relying on it, we will continue to work on the establishment of effective cooperation mechanism among our countries, including in the framework of IFAS (international fund for saving the Aral Sea).

Turkmenistan has consistently taken an active and proactive stance in consolidating the efforts of the IFAS member countries in order to work out a mutually agreed solution to the challenges of overcoming the Aral crisis. Our country, currently chairing the International Fund for Saving the Aral Sea, actively contributes to building up fruitful cooperation on such pressing issues as improving the socio-economic and environmental situation in the Aral Sea region, rational water use, environmental protection and rehabilitation, and adaptation to climate change.

The Aral problem, the root cause of which was the changes in the hydrological regime of the rivers of the basin, is now recognized worldwide as one of the largest global environmental disasters in recent history. The consequences of the ecological catastrophe caused by the irrational use of water resources affected the living conditions of many millions of people living in the Aral Sea basin.

Moreover, the processes of degradation of natural resources caused by intensive shallowing of the Aral Sea, including desertification of coastal areas, deterioration in the quality of natural pastures, soil salinization, the formation of salt marshes and, as a result, a decrease in biological diversity, threaten not only Central Asia, but also adjacent territories.

The situation is aggravated by global climate change taking place on the planet, which increases the risk of dangerous and extreme natural phenomena, such as droughts and dust storms. All of this in general adversely affects the development of agriculture, irrigated agriculture, livestock and other sectors of the economy, creates a threat to the food and energy security of states, and reduces the attractiveness of tourism.

For its part, Turkmenistan is taking concrete measures to improve the socio-ecological situation in the Aral Sea basin. So, in Dashoguz province, the most susceptible to the negative impact of the environmental crisis, the issues of providing the population with clean drinking water are systematically solved, and massive forest planting is being carried out. In this regard, the implementation of the Turkmen Lake construction project plays a key role in ensuring environmental well-being in the region.

It is obvious that the relevance of the Aral issues goes far beyond Central Asia, and therefore it is necessary to create a solid foundation for systemic interstate cooperation with active interaction with international organizations, and above all, the UN. This is the goal of Turkmenistan’s initiative to develop a UN Special Program for the Aral Sea Basin, designed to provide an integrated approach to solving the problems of the Aral crisis with the broad participation of all stakeholders.

A new impetus to cooperation in this field was given during the Summit of Heads of the Founding States of the International Fund for Saving the Aral Sea held in the Avaza National Tourist Zone last year. As is known, the last such five-sided summit meeting took place almost ten years ago and the issues accumulated during this period related to the situation in the Aral Sea region and far beyond its limits required a detailed discussion at the highest state level.

In his address to the 73rd session of the UN General Assembly, Turkmen President Gurbanguly Berdymukhamedov urged UN member states to support the initiative of creating a special UN program for conservation of the Aral Sea basin.

President embarked on the implementation of Turkmenistan’s initiative regarding the elaboration of a Special UN Programme for the Aral Sea basin and earmarking the Aral problem as a separate sphere of Organization’s work.

The UN resolution on the cooperation between the United Nations and the International Fund for Saving the Aral Sea adopted by consensus on 18 April 2018 can serve as a good basis for this.

It is apparent that preservation of the Aral Sea can no longer be considered as an internal regional problem. Its successful solution requires assistance from the international community, an innovative purpose-oriented and comprehensive international approach and systematic participation of the United Nations in this endeavor.

And finally, I would like to mention that the presidents of Turkmenistan and Uzbekistan had a telephone conversation on 26 February 2019.

They discussed the preparations for the summit meeting of the Central Asian heads of state that will take place in Tashkent on 12 April 2019.

In their conversation, President Berdimuhamedov and President Mirziyoyev focused on ‘water diplomacy,’ an area that has become increasingly important in the intra- and inter-regional relations.

They were unanimous in their opinion that a special programme of the UN should be prepared for the Aral Sea basin states, and the initiative for the creation of a multi-partner trust fund for the human security of the region should be pursued. Turkmenistan is the chair of IFAS (international fund for saving the Aral Sea) for the period 2017-2019. * * *