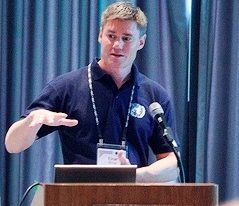 Q: On the 11th October UNOSAT celebrated it’s 15th anniversary. Could you tell us a little about the programme and how it all started ?

The programme started after hurricane Mitch passed Central America in 1998. While trying to mitigate the effects of the disaster, it became clear that little information existed as to the damage extent caused by the hurricane and that satellite imagery could have provided such information. This gave birth to the idea of UNOSAT: An entity that could support affected countries as well as UN agencies with information derived from satellite imagery. With support from the European Space Agency and the French Space Agency, a three year project was financed to explore how satellite imagery could be used in support of humanitarian and development work. The initiative was implemented on behalf of the UN Institute for Training and Research (UNITAR), and later developed into a fully-fledged UNITAR programme.

Q: Over these 15 years of existence, what do you consider as having been the main challenges?
Basically, we were like a start-up company. We had idea we really believed in – and still do! – but at the time not many people understood the potential of satellite imagery. Being part of an extra-budgetary organization of the UN, we also have to fund-raise ourselves. This was a challenge to the point that we barely survived in the early days, but it is amazing what a motivated team can achieve. While we are no longer a start-up we still need to keep a strong focus on delivering timely and high quality output. If we don’t, we are out of business. Fortunately, we see agencies and countries coming back to us requesting more analysis and capacity development. The donor community has now also opened its eyes to what we do, which is of course fundamental in expanding our reach and increasing impact.

Another challenge was more organizational. We came out of the blue and have had to set up an operational production line for analysis and capacity development with all the pitfalls that may bring about.

Ensuring this capability is always there and delivering day in and day out is a challenge, but thanks to a highly dedicated team, and support from an increasing number of countries, we are able to deliver.
Thirdly, it was not easy in the beginning to gain acceptance within the UN system itself for our role. We knew we were filling a gap, we had done our homework, but since this was a bottom-up approach, we did not start with a GA resolution, but rather little by little gained acceptance by proving our value. Once the same agencies were coming back over and over again to request our support, we knew we were on the right track. Now we are the go-to-place for satellite imagery analysis and capacity development in the UN system, and I’m very proud of that.

Q: Technologies have improved, and today satellite images are easier to get than 15 years ago. What has changed from your point of view ?

It is amazing how this technology is advancing. The level of details we can observe from commercial imagery is now 1000 times more than what it was twenty years ago. The number of satellites orbiting the Earth is increasing exponentially, in particular with the new low-cost small-satellite constellations. This means we can in theory have access to public or commercial satellite imagery from anywhere on the planet on a daily basis. Now, remember that these satellites do not continuously acquire images all over the place, and often we need to request new so-called tasking to ensure new photos are taken where we need them.

Then there is the delivery time: Before we sometimes received data as post packages weeks after we had ended our support for a specific event. These days we download the imagery to our servers at CERN – it is fantastic to be hosted at CERN – within a few hours after the satellite has passed for example a flooded region in Africa. We immediately go to work and send out our first analysis that same day or the day after. That is why we call this specific activity UNOSAT Rapid Mapping Service.

In terms of costs, there has also been a significant improvement. When I first entered this type of work, one had to pay USD4,000 for a medium level of detail satellite image. Now that same image is available for free. Today, if we need to purchase a high level of detail already acquired scene, we can do that for about USD300. Tasking is still more expensive, though, but there are new actors coming up that promise dramatic cost-reduction for that as well.

Q: You have been involved in this programme since it’s early days. How did you get into this field, and what is your background ?

I guess I was always interested in space, from having a poster of the Apollo 11 moon landing in my room as a kid, to getting more serious about it through part-time jobs at the California Space Institute and Nansen Centre in Norway. I took a Master in Meteorology looking in particular at climate change over the polar ice caps. However, as I was wrapping up my Master studies, the Rwanda genocide took place. I wanted to use my knowledge of satellite imagery technology to try to help these refugees. That inspired me to get a PhD with focus on humanitarian applications of satellite imagery, in particular for support to refugee protection. I was lucky to get a Junior Professional Officer position with UNHCR upon finishing my PhD, which brought me to Geneva. After finishing the JPO posting I was asked to join the then newly established UNOSAT. I did, and here I am!

Q: Finally being the manager of the program, what do you consider the future challenges, and where do you want to see the programme in 5 and 10 years from now ?

I would say that these days, the challenge is to realize the full potential of satellite imagery and make sure it has a significant impact for developing nations. We have proven how useful this technology is over and over again. Now we need to scale up to include it as the cost-efficient and reliable tool that it is. We need to use the technology in a different manner, though. Too much focus has been on providing ad hoc solutions, while the real potential lies in automatic product generations and constantly feeding this information straight into decision support systems.

A specific example on how this can be done is the joint Centre for the Advancement of Science in Space (CASIS) and UNITAR-UNOSAT Good Earth initiative. This will facilitate access to new satellite technologies, free imagery and free products coupled with capacity development. Using satellite technologies does not need to be costly and it is our goal to put these tools in the hands of developing countries for practical use on for example climate change adaptation, ensuring food security and deriving target indicators for the Sustainable Development Goals. Satellite applications can support all SDGs in one way or the other, and the SDGs are our guide for the years ahead.